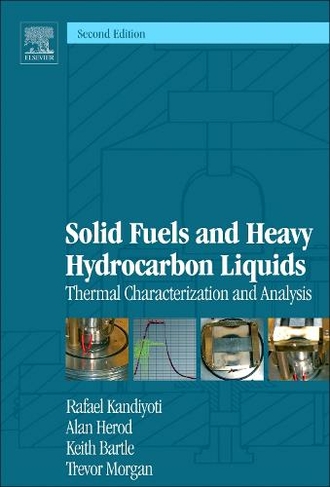 Solid Fuels and Heavy Hydrocarbon Liquids: Thermal Characterisation and Analysis, Second Edition integrates the developments that have taken place since publication of the first edition in 2006. This updated material includes new insights that help unify the thermochemical reactions of biomass and coal, as well as new developments in analytical techniques, including new applications in size exclusion chromatography, several mass spectrometric techniques, and new applications of nuclear magnetic spectroscopy to the characterization of heavy hydrocarbon liquids The topics covered are essential for the energy and fuels research community, including academics, students, and research engineers working in the power, oil and gas, and renewable energy industries.

Dr. Kandiyoti received his BS degree in Chemical Engineering from Columbia University (New York) (1965) and his PhD degree from Imperial College London (1969). He has served in the Chemical Engineering Departments of the Middle East Technical University (Ankara, Turkey, 1969-72) and Bogazici University (Istanbul, Turkey, 1974-80). He joined Imperial College London (1980), where he served as Professor of Chemical Engineering and co-ordinator of the Energy Engineering Group. On retirement (2008), he was appointed as "Distinguished Research Fellow" in the same department.He has over 350 publications on (i) experimental reactor design for pyrolysis, gasification, and liquefaction and the thermochemical characterization of fossil fuels, biomass and waste, (ii) the chemical characterization of heavy hydrocarbon liquids and (iii) environmental aspects of power generation. He has also written on the geopolitics of transnational oil and gas transmission. Dr. Herod has published one book and 262 papers in peer-reviewed journals, conference proceedings, book chapters between 1964 and 2013. Dr. Bartle is the co-author of three books and co-editor of a further three, and has published over 400 refereed research papers over the 50 years from 1964 to 2015. He has successfully supervised 41 graduate students. Dr. Morgan has co-authored 49 peer-reviewed journal articles (9 of these as first author since 2005) which have appeared in leading journals in the areas of analytical chemistry and energy.