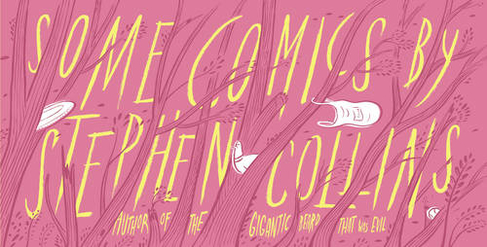 Some Comics by Stephen Collins

By Stephen Collins (Author)
Hardback
https://www.whsmith.co.uk/products/some-comics-by-stephen-collins/stephen-collins/hardback/9780224099691-12-000.html £11.99 rrp £14.99 Save £3.00 (20%)
GBP
Availability
In Stock
Free Delivery Available When You Spend £25 Or More
Details
Spend £25 On Eligible Products To Recieve Free Standard Delivery To You Home Or Free Next Working Day Click And Collect To Store
Share

Stephen Collins is a cartoonist and illustrator. His first book, The Gigantic Beard That Was Evil, was published by Cape in 2013. Praised by the likes of Raymond Briggs and described as 'a future classic' by the Observer, it became the first graphic novel to be shortlisted for Waterstone's Book of the Year and won the Edinburgh Festival's inaugural 9th Art Award. Stephen previously won the Jonathan Cape/Observer Graphic Short Story Prize. His work has appeared in many publications worldwide, and he contributes regular comics to the Guardian Weekend and Prospect magazine. He lives near Hertford with his wife and son. For up-to-date news and work, visit www.colillo.com