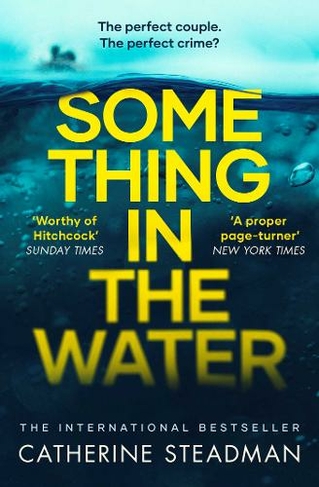 Something in the Water: The Gripping Reese Witherspoon Book Club Pick!

By Catherine Steadman (Author)
Paperback
https://www.whsmith.co.uk/products/something-in-the-water-the-gripping-reese-witherspoon-book-club-pick/catherine-steadman/paperback/9781471167218-12-000.html £7.37 rrp £8.99 Save £1.62 (18%)
GBP
Availability
In Stock
Free Delivery Available When You Spend £25 Or More
Details
Spend £25 on eligible products to receive free standard delivery to home or free next working day click and collect to store
Share

*** THE INTERNATIONAL BESTSELLER AND REESE WITHERSPOON BOOKCLUB 2018 PICK! *** The perfect couple. The perfect crime? 'Deftly paced, elegantly chilly thriller... Steadman brings similar qualities of wit, timing and intelligence to this novel... a proper page-turner' New York Times Erin is a documentary filmmaker on the brink of a professional breakthrough; Mark a handsome investment banker with a bright future. They seem to have it all. But do they? On a dream honeymoon to the tropical island of Bora Bora, Mark takes Erin scuba diving. Everything is perfect. Until they find something in the water. Something that will change their lives forever. Erin and Mark decide to keep their discovery a secret. No one else need know; they trust each other implicitly. But someone else does know. And in situations like these, it is far better to trust no one, not even those closest to you ... Set to be the blockbuster read of the summer, this is an unmissable, fast-paced, jaw-dropping thriller from a debut writer destined for great things. 'A wild, page-turning ride! It's the perfect beach read!' Reese Witherspoon (Reese's Book Club x Hello Sunshine book pick) 'Worthy of Hitchcock' Sunday Times 'Pure adrenaline: I swallowed this book whole' Erin Kelly, author of He Said, She Said 'A thriller for our times' Louise Candlish, author of Our House 'A stunning debut. Superbly written, clever and gripping' BA Paris, author of Behind Closed Doors 'A fascinating moral dilemma' Gillian McAllister, author of Everything but the Truth 'It was the relatability of Erin's voice that set it apart from so many other thrillers as it automatically got me thinking 'What would I do in her position?' Caz Frear, author of Sweet Little Lies 'This debut's opening hook, which jumps ahead in the story to reveal a shocking outcome, teamed with Erin's spunk and the threat of Russian mobsters, creates irresistible suspense-of both the what-will-happen and the how-did-that-happen varieties' Booklist 'A delicious page-turner' New York Post 'Catherine Steadman bursts onto the thriller scene with this exceptional debut psychological thriller, written in the vein of Paula Hawkins and Gillian Flynn... Deftly plotted and told with lightning-quick pacing... Something in the Water is psychological suspense at its absolute finest, and Steadman has all the makings of a writer poised to shoot straight to the top of the genre' Book Spy 'I loved this. It was so addictive... What follows is a twisty adventure that is a whole lot of fun and does actually beg the question 'what would YOU do?' Highly recommended' Liz Loves Books 'A terrific debut' Criminal Element 'Bombshell thriller... Drawing you in from the very first sentence ... and becomes a nice twist on the typical psychological thriller' Book Tribe 'If you like thrillers with a huge twist and great plot this is for you' Fiction Obsession 'Catherine Steadman's enthralling voice shines throughout this spellbinding debut novel' Dwell in Possibility 'A taut, relentless read. Written in the early stages to the beat of a steady drum, once the 'something' in the water appears, it sets off a chain of events that build to a Bourne-like intensity, delivering a shocking discovery at the very end' Better Reading AU 'A sumptuous read, packed with numerous cinematic scenes and a plot that will make your head spin. It is brilliantly written' Year of Reading Selfishly Blog

Catherine Steadman is an actress and writer based in North London. She is known for her roles in Downton Abbey and Tutankhamun, starring alongside Sam Neill, as well as shows including Breathless, The Inbetweeners, The Tudors, and Fresh Meat. In 2017 Catherine will feature in political thriller Fearless and new BBC comedy Bucket. She also has appeared on stage in the West End including Oppenheimer for the RSC, for which she was nominated for a 2016 Laurence Olivier Award.