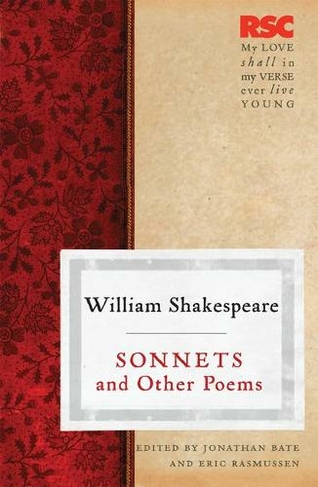 Sonnets and Other Poems: (The RSC Shakespeare)

From the Royal Shakespeare Company - a modern, definitive edition of Shakespeare's much-loved sonnets and poems. With an expert introduction by Sir Jonathan Bate, this unique edition presents a historical overview of Shakespeare's Sonnets and Other Poems, providing an illuminating insight into the extraordinary variety of interpretations that are possible. Ideal for students and lovers of Shakespeare everywhere, the RSC editions offer a fresh, accessible and contemporary approach to reading and rediscovering Shakespeare's works for the twenty-first century. 384 p.

SIR JONATHAN BATE is Professor of Shakespeare and Renaissance Literature, University of Warwick, UK, and the editor of The RSC Shakespeare: The Complete Works. He has held visiting posts at Harvard, Yale and UCLA and is a Fellow of the Royal Society of Literature, a Fellow of the British Academy, an Honorary Fellow of St Catherine's College, Cambridge, and a Governor and Board member of the Royal Shakespeare Company. A prominent critic, award-winning biographer and broadcaster, he is the author of several books on Shakespeare, including The Genius of Shakespeare (Picador), which was praised by Sir Peter Hall, founder of the RSC, as 'the best modern book on Shakespeare.' In June 2006 he was awarded a CBE by HM The Queen 'for services to Higher Education'. ERIC RASMUSSEN is Professor of English at the University of Nevada, USA, and the Textual Editor of The RSC Shakespeare: The Complete Works. He is co-editor of the Norton Anthology of English Renaissance Drama and has edited volumes in both the Arden Shakespeare and Oxford World's Classics series. He is the General Textual Editor of the Internet Shakespeare Editions project - one of the most visited Shakespeare websites in the world. For over nine years he has written the annual review of editions and textual studies for the Shakespeare Survey.