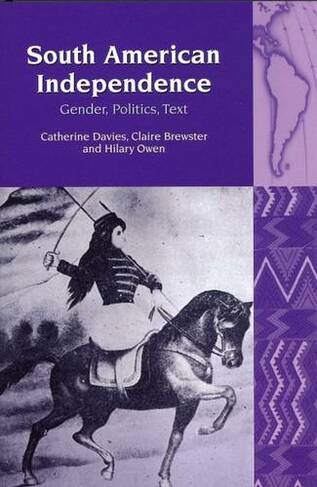 By Catherine Davies (Author), Claire Brewster (Author), Hilary Owen (Author)
Paperback
https://www.whsmith.co.uk/products/south-american-independence-gender-politics-text-7-digital-original/catherine-davies/claire-brewster/paperback/9781846316845-01-000.html £18.99
GBP
Availability
Currently unavailable. We don't know when or if this item will be back in stock
Free Saver Delivery on orders over £20
Details
FREE SHIPPING over £20 for Saver Delivery
Share

The struggles for independence in Latin America during the first half of the nineteenth century were accompanied by a wide-ranging debate about political rights, nationality and citizenship. In South American Independence, Catherine Davies, Claire Brewster and Hilary Owen investigate the neglected role of gender in that discussion. Examining women writers from Brazil, Argentina, Chile, Peru, and Colombia, the book traces the contradictions inherent in revolutionary movements that, while arguing for the rights of all, remained ambivalent, at best, about the place of women. Through studies of both published and unpublished writings, South American Independence reveals the complex role of women in shaping the vexed ideologies of independence.