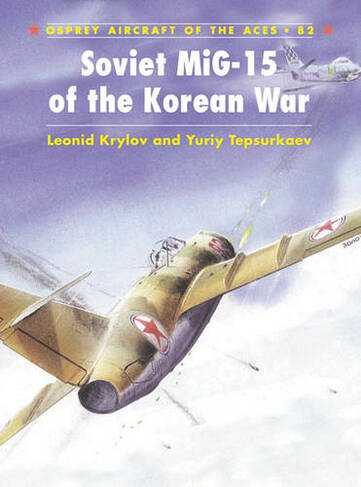 The Soviet Union began assisting the People's Republic of China in its establishment of a modern air force in 1950, when Soviet Air Force regiments were sent to train local pilots. China's involvement in the Korean War in late October 1950 inevitably drew Soviet pilots into the war. A total of 52 Soviet pilots scored five or more victories in the Korean War. The history of these covert actions has been a long-buried secret and this book will be the first English publication to detail the only instance when the Cold War between Russia and the US became "hot." This book uncovers Soviet combat experiences during the Korean War from detailed unit histories and rare first-hand accounts. With access to extensive Russian archives, the authors offer an enthralling insight into an air war that has been largely covered up and neglected, illustrated with previously unpublished photographs and detailed full-color profiles. Illustrations (some col.)

Leonid Krylov and Yuriy Tepsurkaev have been researching the covert Soviet Air Force participation in the air war over North Korea for almost 20 years, and they have published several articles and books on the subject in Russia. Their research, started in 1989, is based on Soviet documents stored at the Central Archive of the Russian Defence Ministry and recollections of veterans of the 64th IAK. During 17 years of research, the authors have accumulated recollections from over 100 participants in the Korean War, and studied several thousand archive documents ranging from debriefing and combat reports to documents drawn up by the Air Force Commander-in-Chief and the Air Force General Staff. The author lives in Russia.