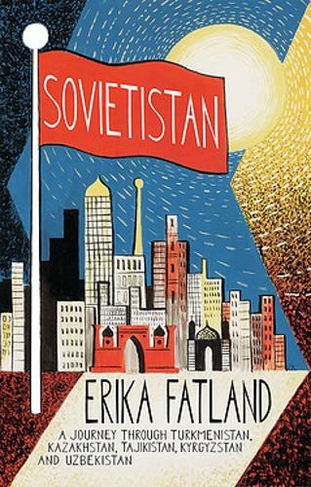 Sovietistan: A Journey Through Turkmenistan, Kazakhstan, Tajikistan, Kyrgyzstan and Uzbekistan

"A mesmerising trip across Central Asia . . . A fascinating travelogue" Financial Times SHORTLISTED FOR EDWARD STANFORD/LONELY PLANET DEBUT TRAVEL WRITER OF THE YEAR 2020 Erika Fatland takes the reader on a journey that is unknown to even the most seasoned globetrotter. The five former Soviet Republics' Kazakhstan, Kyrgyzstan, Tajikistan, Turkmenistan and Uzbekistan all became independent when the Soviet Union fell apart in 1991. How have these countries developed since then? In the Kyrgyzstani villages Erika Fatland meets victims of the widely known tradition of bride snatching; she visits the huge and desolate Polygon in Kazakhstan where the Soviet Union tested explosions of nuclear bombs; she meets Chinese shrimp gatherers on the banks of the dried out Aral Sea and she witnesses the fall of a dictator. She travels incognito through Turkmenistan, a country that is closed to journalists. She meets exhausted human rights activists in Kazakhstan, survivors from the massacre in Osh in 2010, German Menonites that found paradise on the Kyrgyzstani plains 200 years ago. During her travels, she observes how ancient customs clash with gas production and she witnesses the underlying conflicts between ethnic Russians and the majority in a country that is slowly building its future in Nationalist colours. In these countries, that used to be the furthest border of the Soviet Union, life follows another pace of time. Amidst the treasures of Samarkand and the bleakness of Soviet architecture, Erika Fatland moves with her openness towards the people and the landscapes around her. A rare and unforgettable travelogue.

Erika Fatland was born in 1983 and studied Social Anthropology at the University of Oslo. Her 2011 book, The Village of Angels, was an in situ report on the Beslan terror attacks of 2004 and she is also the author of The Year Without Summer, describing the harrowing year that followed the massacre on Utoya in 2011. She speaks eight languages and lives in Oslo with her husband.