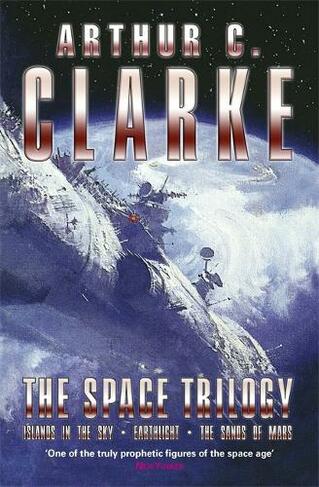 By Arthur C. Clarke (Author)
Paperback
https://www.whsmith.co.uk/products/space-trilogy-three-early-novels-gollancz-sf/arthur-c-clarke/paperback/9781857987805-12-000.html £9.01 rrp £10.99 Save £1.98 (18%)
GBP
Availability
In Stock
Free Delivery Available When You Spend £25 Or More
Details
Spend £25 On Eligible Products To Receive Free Standard Delivery To You Home Or Free Next Working Day Click And Collect To Store
Share

The omnibus edition of three classic and inspirational Clarke tales ISLANDS IN THE SKY, first published in 1954, sees Roy Malcolm winning a trip to the Inner Station, a space station rotating 500 miles from Earth. THE SANDS OF MARS, set in the 21st century, has a group of pioneers struggling to change the face of this inhospitable planet. In EARTHLIGHT, two centuries hence, man has colonised the planets and the inhabitants of the Moon owe no allegiance to any nation on Earth - or to Earth itself ... This omnibus edition of three of Arthur C. Clarke's early novels shows the author of 2001: A SPACE ODYSSEY exploring space and time in adventurous and thoughtful ways.

Arthur C. Clarke was born in Minehead in 1917. During the Second World War he served as an RAF radar instructor, rising to the rank of Flight-Lieutenant. After the war he won a BSc in physics and mathematics with first class honours from King's College, London. One of the most respected of all science-fiction writers, he also won the KALINGA PRIZE, the AVIATION SPACE-WRITERS PRIZE,and the WESTINGHOUSE SCIENCE WRITING PRIZE. He also shared an OSCAR nomination with Stanley Kubrick for the screenplay of 2001: A SPACE ODYSSEY, which was based on his story, 'The Sentinel'. He lived in Sri Lanka from 1956 until his death in 2008.To discover more about how the legacy of Sir Arthur is being honoured today, please visit http://www.clarkefoundation.org