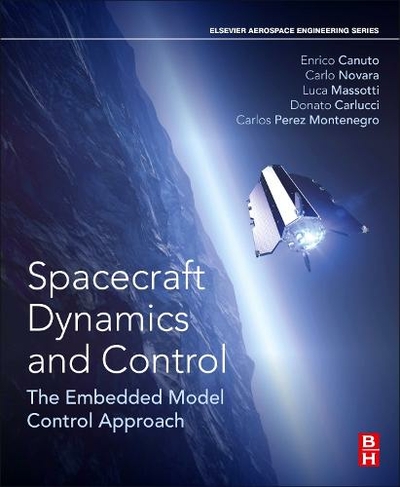 Also available on eBook for £121.43. Click here to purchase from Rakuten Kobo

Spacecraft Dynamics and Control: The Embedded Model Control Approach provides a uniform and systematic way of approaching space engineering control problems from the standpoint of model-based control, using state-space equations as the key paradigm for simulation, design and implementation. The book introduces the Embedded Model Control methodology for the design and implementation of attitude and orbit control systems. The logic architecture is organized around the embedded model of the spacecraft and its surrounding environment. The model is compelled to include disturbance dynamics as a repository of the uncertainty that the control law must reject to meet attitude and orbit requirements within the uncertainty class. The source of the real-time uncertainty estimation/prediction is the model error signal, as it encodes the residual discrepancies between spacecraft measurements and model output. The embedded model and the uncertainty estimation feedback (noise estimator in the book) constitute the state predictor feeding the control law. Asymptotic pole placement (exploiting the asymptotes of closed-loop transfer functions) is the way to design and tune feedback loops around the embedded model (state predictor, control law, reference generator). The design versus the uncertainty class is driven by analytic stability and performance inequalities. The method is applied to several attitude and orbit control problems.