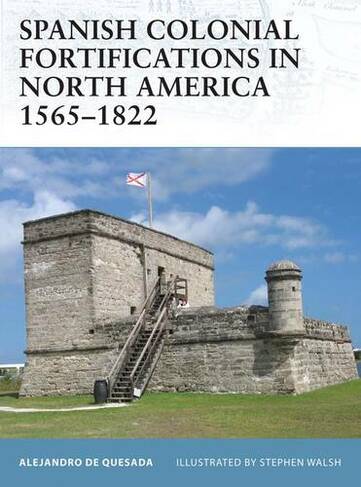 By Alejandro De Quesada (Author), Stephen Walsh (Illustrator)
Paperback
https://www.whsmith.co.uk/products/spanish-colonial-fortifications-in-north-america-15651822-fortress-no-94/alejandro-de-quesada/stephen-walsh/paperback/9781846035074-01-000.html £11.95 rrp £12.99 Save £1.04 (8%)
GBP
Availability
Currently unavailable. We don't know when or if this item will be back in stock
Free Saver Delivery on orders over £20
Details
FREE SHIPPING over £20 for Saver Delivery
Share

To maintain its imperial power in America, Spain built fortifications across the width of the continent. These outposts were established along Spanish borders from the late sixteenth century onwards to defend its interests against rival European powers and to suppress uprisings of the Native Americans and local population. By the eighteenth century, Spain's defenses spread from the northern area of the Gulf of Mexico through to California. Some of these imperial fortifications, such as the Alamo, played key roles in conflicts including the American Revolution and the Texan War of Independence. This book provides a cogent analysis of Spain's defensive network at the height of the country's imperial strength on the American continent. Illustrations (chiefly col.)