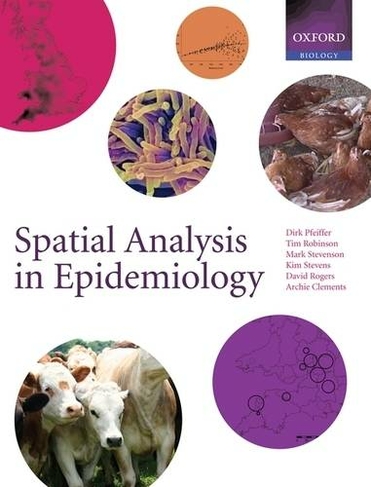 This book provides a practical, comprehensive and up-to-date overview of the use of spatial statistics in epidemiology - the study of the incidence and distribution of diseases. Used appropriately, spatial analytical methods in conjunction with GIS and remotely sensed data can provide significant insights into the biological patterns and processes that underlie disease transmission. In turn, these can be used to understand and predict disease prevalence. This user-friendly text brings together the specialised and widely-dispersed literature on spatial analysis to make these methodological tools accessible to epidemiologists for the first time. With its focus is on application rather than theory, Spatial Analysis in Epidemiology includes a wide range of examples taken from both medical (human) and veterinary (animal) disciplines, and describes both infectious diseases and non-infectious conditions. Furthermore, it provides worked examples of methodologies using a single data set from the same disease example throughout, and is structured to follow the logical sequence of description of spatial data, visualisation, exploration, modelling and decision support. This accessible text is aimed at graduate students and researchers dealing with spatial data in the fields of epidemiology (both medical and veterinary), ecology, zoology and parasitology, environmental science, geography and statistics. 50 illustrations, including an 8 page colour plate section

Dirk Pfeiffer graduated in Veterinary Medicine in Germany in 1984. He obtained his PhD in Veterinary Epidemiology from Massey University, Palmerston North, New Zealand in 1994. He has worked as an academic in New Zealand until accepting a professorship in veterinary epidemiology at the Royal Veterinary College in 1999. His particular interest is the epidemiology and control of infectious diseases, and his technical expertise includes fieldepidemiological and ecological research methods, advanced epidemiological analysis, spatial and temporal analysis of epidemiological data, risk analysis, computer modelling of animal disease, animal health economics and development of animal health information systems. Dirk provides scientific expertise to variousorganizations including the European Food Safety Authority, Defra, the Food and Agriculture Organization, as well as various international governments.Timothy Robinson graduated from the University of Oxford with a degree in pure and applied biology in 1988. His PhD, at the University of Reading, was on the ecology of the African armyworm, and involved extensive fieldwork in Kenya. After his doctorate he went on to work in Zambia (1992-1996) as a field ecologist, providing technical support to the Regional Tsetse and Trypanosomiasis Control Programme. This was followed by a stint of research at the University of Oxford(1996-1999), as a zoology research fellow and a fellow of Linacre College. From 1999-2002 he was employed as a scientist at the International Livestock Research Institute (ILRI) in Nairobi, again working on diseases of livestock. From ILRI, Timothy moved to the United Nations Food and Agriculture Organisation, where hecurrently works in the Livestock Information, Sector Analysis and Policy Branch.Mark Stevenson is senior lecturer in veterinary epidemiology at Massey University, Palmerston North New Zealand. He received his PhD in veterinary epidemiology in 2003 from Massey University. Dr. Stevenson was awarded the Chris Baldock Prize for Early Career Researcher from the Australian Biosecurity Cooperative Research Centre in 2006 and is a member of the Australian College of Veterinary Scientists.After completing an MSc in Agriculture in 1995 Kim Stevens worked for the Veterinary Faculty of the University of Pretoria (South Africa), first as a Technical Assistant in the Department of Veterinary Physiology and then as a Senior Technical Assistant for the Equine Research Centre. She moved to England in 2000, and joined the Royal Veterinary College in 2002 as a Clinical Research Assistant.David Rogers is Professor of Ecology in Oxford University. His interests include population ecology of pests and vectors of disease, mathematical modelling, epidemiology and the application of remotely sensed environmental data to conservation and epidemiology/epizootiology.Archie Clements graduated with a Bachelor of Veterinary Science degree from the University of Sydney in 1996. He then spent two years working in veterinary practice before undertaking an internship and concurrent Masters degree in Veterinary Medicine at the University of Glasgow; going on to study a PhD in veterinary epidemiology at the Royal Veterinary College, University of London, starting in October 2000. His thesis focussed on the application of new spatial analyticalmethods to decision-making and resource-allocation in veterinary diseases. He spent two years working as an epidemiologist at Imperial College London before moving to the School of Population Health, University of Queensland, where he is currently employed as a Senior Lecturer in epidemiology.