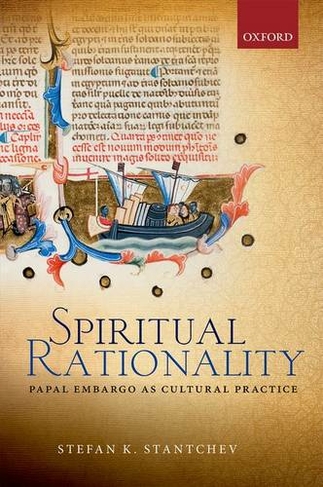 Spiritual Rationality: Papal Embargo as Cultural Practice offers the first book-length study of embargo in a pre-modern period and provides a unique exploration into the domestic implications of this tool of foreign policy. Based on a large and varied body of archival and printed, papal and secular sources, this inquiry covers Europe and the broader Mediterranean from c. 1150 to c. 1550. During this time of an increasing papal role within Christian society, the church employed restrictions on trade with Muslims, pagans, 'heretics', 'schismatics', disobedient Catholic communities and individual Jews in order to facilitate papally-endorsed warfare against external enemies and to discipline internal foes. Various trade bans were originally promulgated as individual responses to specific circumstances. These restrictions, however, were shaped by the premise that sin and the defense of the decorum of the faith and Christendom condoned, or even required, papal intervention into the lives of the laity and by the text-based approach of popes and canonists. Papal embargo, consequently, was not only the sum total of individual trade bans but also a legal and moral discourse that classified exchanges into legitimate and illegitimate ones, compelled merchants to distinguish clearly between themselves as (Roman) Christians and a multitude of others as non-Christians, and helped order symbolically both the relationships between the two groups and those between church and laity. Papal embargo's chief relevance thus lay within Christian society itself, where it functioned as an intangible pastoral staff. While sixteenth-century developments undermined it as a policy tool and a moral discourse alike, papal embargo inscribed the notion of the immorality of trade with the enemy into European thought.

Stefan Stantchev earned his PhD in history at the University of Michigan in 2009, joining the faculty of Arizona State University's New College. His research interests focus mainly on the religious and economic factors that shaped human relations in the Mediterranean, c 1100 to c 1600. His work thus engages topics that are often treated separately, such as economic and church history, or foreign policy and religious identity. He has been offeredfellowships and research grants from the Social Science Research Council, The Institute for the Humanities at the University of Michigan, the American Historical Association, and the Medieval Academy of America, among others.