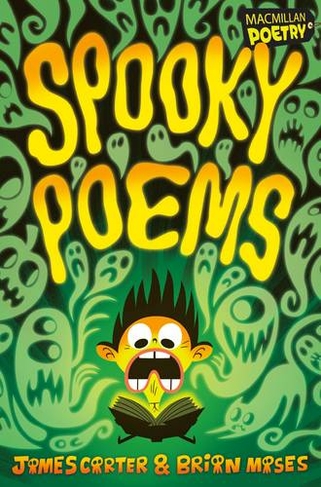 Also available on eBook. Click here to purchase from Kobo.com
A spooktacular poetry collection! Spooky Poems is a collection of scary poems about ghosts, ghouls, bats, witches, vampires and all things creepy -by bestselling children's poets Brian Moses and James Carter. The perfect gift for Halloween!A Good Scary Poem Needs . . . A haunted house, a pattering mouse. A spooky feeling, a spider-webbed ceiling. A squeaking door, a creaking floor. A swooping bat, the eyes of a cat. A dreadful dream, a distant scream. A ghost that goes 'BOO' and You!

Brian Moses has been a professional poet since 1988. He spends half his time writing and the rest of the time visiting schools across the UK and Europe to perform his poetry and percussion show. His poetry books include Brian Moses' School Report, Behind the Staffroom Door and A Cat Called Elvis. His solo collections and anthologies for Macmillan have sold over 1 million copies and he is featured on the National Poetry Archive. He is co-author (with Roger Stevens) of What Are We Fighting For?, a collection of war poems written especially for a younger audience. Brian lives in a small Sussex village with his wife and their loopy Labrador.James Carter lives in Oxfordshire with his wife and two daughters. His poems have been published in dozens of anthologies, in his own collection, Journey to the Centre of My Brain, and, with Graham Denton, in Grrr! Dinos, Dragons and Other Beastie Poems. He spends a lot of his time visiting schools, where he perform his poems and plays his guitar.