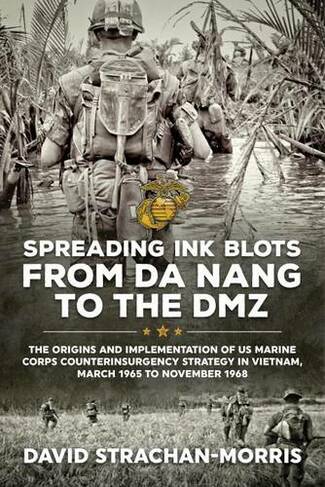 Spreading Ink Blots from Da Nang to the DMZ: The Origins and Implementation of Us Marine Corps Counterinsurgency Strategy in Vietnam, March 1965 to November 1968 (Wolverhampton Military Studies)

During the United States' involvement in the war in Vietnam, the decision by the US Marine Corps to emphasise counterinsurgency operations in coastal areas was the cause of considerable friction between the Marines and the army commanders in Vietnam, who wanted the corps to conduct more conventional operations. This book will examine the background to the Marines' decision and place it in the context of Marine Corps doctrine, infrastructure and logistical capability. For the first time, this book brings together the Marine Corps' background in counterinsurgency and the state of contemporary counterinsurgency theory in the 1960s - combining this with the strategic outlook, role, organisation and logistic capability of the Marine Corps to provide a complete view of its counterinsurgency operations. This book will argue that the US Marine Corps successfully used counterinsurgency as a means to achieve their primary aim in Vietnam - the defence of three major bases in the coastal area in the north of the Republic of Vietnam - and that the corps' decision to emphasise a counterinsurgency approach was driven as much by its background and infrastructure as it was by the view that Vietnam was a 'war for the people'. This book is also an important contribution to the current debate on counterinsurgency, which is now seen by many in the military doctrine arena as a flawed or invalid concept following the perceived failures in Iraq and Afghanistan - largely because it has been conflated with nation-building or democratisation. Recent works on British counterinsurgency have also punctured the myth of counterinsurgency as being a milder form of warfare - with the main effort being the wellbeing of the population - whereas in fact there is still a great deal of violence involved. This book will bring the debate 'back to basics' by providing an historical example of counterinsurgency in its true form: a means of dealing with terrorist or guerrilla warfare at an operational level to achieve a specific aim in a specific area within a specific period of time. 2 b/w maps, 6 tables, 2 figures

David Strachan-Morris is a Lecturer in Intelligence and Security at the University of Leicester. He wrote his PhD thesis on the US Marine Corps in Vietnam and retains a keen interest in Marine Corps history. His other publications on the corps include From the Banana Wars to the Three Block War: Warrior Scholars in the US Marine Corps; and a chapter in the book Warrior Scholars in Counterinsurgency. He has also spoken about the US Marines in Northern Ireland during the Second World War on BBC Radio Ulster. He served in the British Army before earning his PhD at the University of Wolverhampton and becoming a full-time academic. Recent publications include Threat and Risk: What is the Difference and Why Does it Matter; Intelligence and National Security (27 February 2012, pp. 172-186); and Leadership Decapitation: Al Qa'ida in Iraq as a Case Study' (RUSI Journal, August/September 2010, pp. 32-26). In his spare time he takes part in historical re-enactments and enjoys watching rugby and ice hockey - being a keen supporter of his local teams.