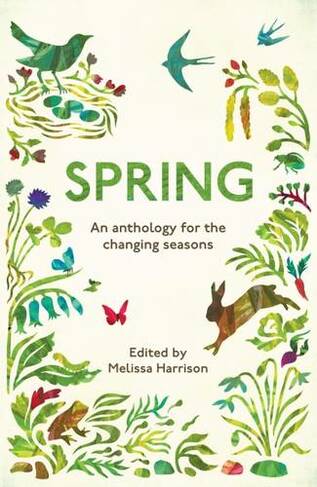 Spring An Anthology for the Changing Seasons

By Melissa Harrison (Author)
Paperback
https://www.whsmith.co.uk/products/spring-an-anthology-for-the-changing-seasons/melissa-harrison/paperback/9781783962235-12-000.html £10.65 rrp £12.99 Save £2.34 (18%)
GBP
Availability
In Stock
Free Delivery Available When You Spend £25 Or More
Details
Spend £25 on eligible products to receive free standard delivery to home or free next working day click and collect to store
Share

Also available on eBook for £6.11. Click here to purchase from Rakuten Kobo

It is a time of awakening. In our -fields, hedgerows and woodlands, our beaches, cities and parks, an almost imperceptible shift soon becomes a riot of sound and colour: winter ends, and life surges forth once more. Whether in town or country, we all share in this natural rhythm, in the joy and anticipation of the changing year.; In prose and poetry both old and new, Spring mirrors the unfolding of the season, inviting us to see what's around us with new eyes. Featuring original writing by Rob Cowen, Miriam Darlington and Stephen Moss, classic extracts from the work of George Orwell, Clare Leighton and H. E. Bates, and fresh new voices from across the UK, this is an original and inspiring collection of nature writing that brings the British springtime to life in all its vivid glory.

Melissa Harrison won the John Muir Trust's 'Wild Writing' Award in 2010 and was a Writer in Residence at Gladstone's Library in 2014. She delivered one of the inaugural Coleridge Lectures as part of Bristol's Festival of Ideas, spoke about landscape and Englishness at The Southbank's Changing Britain festival, and has appeared on Radio 4's Open Book and The Arts Show on Radio 2. She writes for the Nature Notes column in The Times and blogs about nature at Tales of the City. Her first novel, Clay, was published by Bloomsbury in January 2013, followed by At Hawthorn Time in April 2015. She studied English Literature at Oxford.; Founded in 1912 by Charles Rothschild as the Society for the Promotion of Nature Reserves, today The Wildlife Trusts are the UK's largest voluntary environmental organisation striving to restore wildlife on land and at sea. There are 47 individual Wildlife Trusts, all working towards preserving an environment rich in wildlife for everyone.