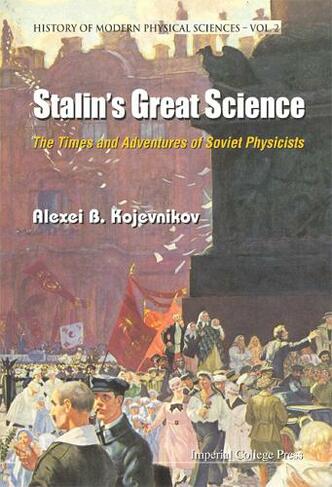 Stalin's Great Science: The Times And Adventures Of Soviet Physicists 2

World-class science and technology developed in the Soviet Union during Stalin's dictatorial rule under conditions of political violence, lack of international contacts, and severe restrictions on the freedom of information. Stalin's Great Science: The Times and Adventures of Soviet Physicists is an invaluable book that investigates this paradoxical success by following the lives and work of Soviet scientists - including Nobel Prize-winning physicists Kapitza, Landau, and others - throughout the turmoil of wars, revolutions, and repression that characterized the first half of Russia's twentieth century.The book examines how scientists operated within the Soviet political order, communicated with Stalinist politicians, built a new system of research institutions, and conducted groundbreaking research under extraordinary circumstances. Some of their novel scientific ideas and theories reflected the influence of Soviet ideology and worldview and have since become accepted universally as fundamental concepts of contemporary science. In the process of making sense of the achievements of Soviet science, the book dismantles standard assumptions about the interaction between science, politics, and ideology, as well as many dominant stereotypes - mostly inherited from the Cold War - about Soviet history in general. Science and technology were not only granted unprecedented importance in Soviet society, but they also exerted a crucial formative influence on the Soviet political system itself. Unlike most previous studies, Stalin's Great Science recognizes the status of science as an essential element of the Soviet polity and explores the nature of a special relationship between experts (scientists and engineers) and communist politicians that enabled the initial rise of the Soviet state and its mature accomplishments, until the pact eroded in later years, undermining the communist regime from within.