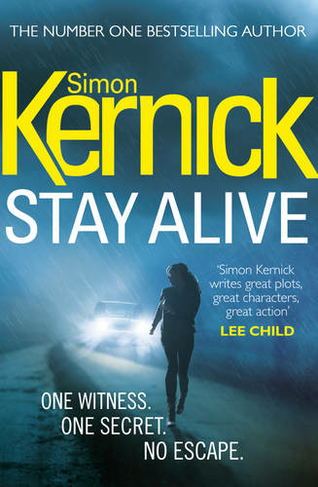 By Simon Kernick (Author)
Paperback
https://www.whsmith.co.uk/products/stay-alive-scope-2/simon-kernick/paperback/9780099579090-12-000.html £7.37 rrp £8.99 Save £1.62 (18%)
GBP
Availability
In Stock
Free Delivery Available When You Spend £15 Or More
Details
Spend £15 On Eligible Products To Recieve Free Standard Delivery To You Home Or Free Next Working Day Click And Collect To Store
Share

The gripping new race-against-time thriller by the best-selling author of Relentless, The Last 10 Seconds, Siege and Ultimatum. ONE WITNESS You're on a trip with your family, miles from anywhere. A shot rings out - and your whole life changes in an instant. ONE SECRET A woman is racing towards you, chased by three gunmen. Although you don't know it, she harbours a deadly secret. She's in terrible danger. And now you are too. NO ESCAPE You're running, terrified, desperate to find safety. You know that the men hunting you have killed before. And if they catch you, you'll be next ... 'Brilliant' Sunday Mirror 'Hang on tight!' Harlen Coben

Simon Kernick is one of Britain's most exciting thriller writers. He arrived on the crime writing scene with his highly acclaimed debut novel The Business of Dying, the story of a corrupt cop moonlighting as a hitman. His breakthrough novel Relentless was the biggest selling thriller of 2007. His most recent crime thrillers include The Last Ten Seconds, The Payback, Siege and Ultimatum.Simon talks both on and off the record to members of the Met's Special Branch and the Anti-Terrorist Branch and the Serious and Organised Crime Agency, so he gets to hear first hand what actually happens in the dark and murky underbelly of UK crime. To find out more about his thrillers, visit www.simonkernick.com; www.facebook.com/SimonKernick; www.twitter.com/simonkernick