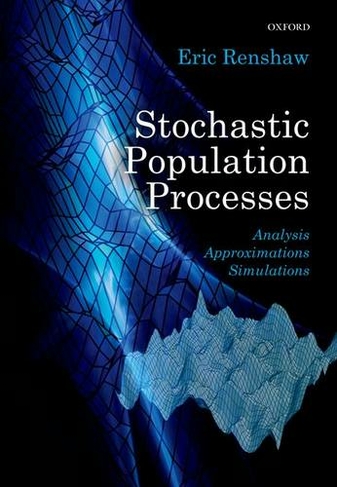 The vast majority of random processes in the real world have no memory - the next step in their development depends purely on their current state. Stochastic realizations are therefore defined purely in terms of successive event-time pairs, and such systems are easy to simulate irrespective of their degree of complexity. However, whilst the associated probability equations are straightforward to write down, their solution usually requires the use of approximation and perturbation

Eric Renshaw graduated from Imperial College, London with a B.Sc. in Mathematics, studied for the Diploma in Statistics at Manchester University, and then researched for his M.Phil. and Ph.D. degrees in spatial stochastic population processes at Sussex and Edinburgh Universities. He joined the staff of Edinburgh University in 1969, first as lecturer and then senior lecturer, before taking up the position of Professor of Statistics at the University of Strathclyde in1991 where he remained until his retirement at the end of 2007. He was then awarded an Emeritus Professorship there and continues to take an active research interest in applied probability problems. He was elected to membership of The International Statistical Institute in 1984, and The Royal Societyof Edinburgh in 1995, and as an author of over 100 papers on temporal and spatial-temporal stochastic process he is an internationally recognised authority in this field.