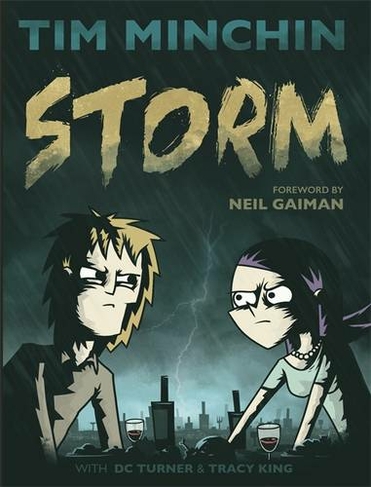 Dazzling illustrated poetry from the magical mind of Tim Minchin. This is his first ever book and features a foreword from Neil Gaiman. A storm is brewing in the confines of a London dinner party. Small talk quickly descends into a verbal and intellectual battle between science and belief, as comedian Tim goes head to head with the mysterious fifth guest at the table - a hippy named Storm. With stunning original artwork, Tim's sublime ranty beat-poem weaves through the world we live in, where alternative medicine is given credence and public funding, psychics have primetime TV exposure and people are happy with mystery rather than answers. While Storm herself may not be converted, audiences from London to Sydney have been won over by Tim's lyrical wonders and the timely message of the piece in a society where science is attacked as the enemy of belief. STORM is the illustrated book born from the acclaimed internet sensation - the animation that has become an anthem for critical thinking worldwide, attracting over three million views. Now fully reimagined, STORM is a masterpiece that sparkles with beauty, wit, reason and rationality. Watch the video here: http://bit.ly/1s2DUuU

Tim Minchin is an award-winning Australian musician, composer, songwriter, actor, comedian and writer. His current songs span various musical styles and topics such as environmentalism, rationalism, prejudice(ism), logical fallacies(ism) and his amour de fromage et de boobs(ism). He is the composer and lyricist for the West End and Broadway Musical MATILDA, provided narration for Shaun Tan's OSCAR-winning animation THE LOST THING, and completed an arena tour culminating in dates at the Sydney Opera House, and the Royal Albert Hall with the 55-piece Heritage Orchestra. He is a global superstar, with over 730,000 followers on Twitter and an army of fans. He lives in LA with his wife and two children.https://twitter.com/timminchin