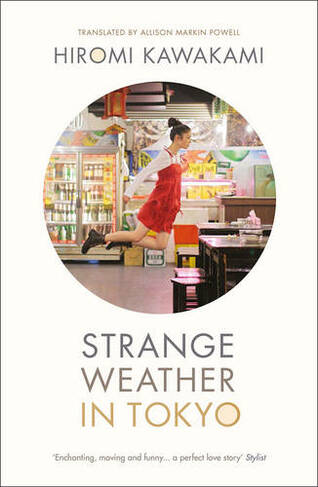 Tsukiko is in her late 30s and living alone when one night she happens to meet one of her former high school teachers, 'Sensei', in a bar. He is at least thirty years her senior, retired and, she presumes, a widower. After this initial encounter, the pair continue to meet occasionally to share food and drink sake, and as the seasons pass - from spring cherry blossom to autumnal mushrooms - Tsukiko and Sensei come to develop a hesitant intimacy which tilts awkwardly and poignantly into love. Perfectly constructed, funny, and moving, Strange Weather in Tokyo is a tale of modern Japan and old-fashioned romance.

Born in 1958 in Tokyo, HIROMI KAWAKAMI is one of Japan's most popular contemporary novelists. She is the recipient of the Pascal Short Story Prize for New Writers and the Akutagawa Prize. Her novel Drowning won both the Ito Sei Literature Award and Joryu Bungaku Sho (Women Writers' Prize) in 2000. Her novel Manazuru won the 2011 Japan-U.S. Friendship Commission Prize. Strange Weather in Tokyo (Sensei no kaban) won the Tanizaki prize in 2001, was shortlisted for the Man Asian Literary Prize in 2013, and has been translated into thirteen languages.ALLISON MARKIN POWELL is a literary translator and editor in New York City. She has translated works by Osamu Dazai, Kaho Nakayama, and Motoyuki Shibata, and she was the guest editor for the first Japan issue of Words Without Borders.