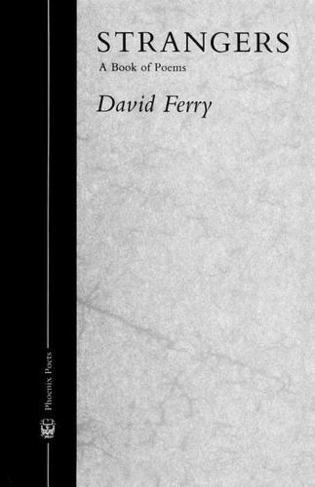 Strangers A Book of Poems

David Ferry was born in Orange, New Jersey in 1924. He is the author of a number of books of poetry and has translated several works from classical languages. Currently he is the Sophie Chantal Hart Professor Emeritus of English at Wellesley College, as well as a visiting lecturer in the Graduate Creative Writing Program at Boston University and a distinguished visiting scholar at Suffolk University. His book of new and selected poems and translations, Of No Country I Know, published in 1999 by the University of Chicago Press, received the Lenore Marshall Prize from the Academy of American Poets and the Rebekah Johnson Bobbitt National Prize for Poetry from the Library of Congress. In 2011 he was awarded the $100,000 Ruth Lilly Poetry Prize for lifetime achievement. Other awards include the Sixtieth Fellowship of the Academy of American Poets, the Harold Morton Landon Translation Award, the Teasdale Prize for Poetry, the John Simon Guggenheim Foundation Fellowship, the Ingram Merrill Award, and the William Arrowsmith Translation Prize from AGNI magazine. He was elected a fellow of the American Academy of Arts and Sciences in 1998.He won the 2012 National Book Award for Poetry for Bewilderment.