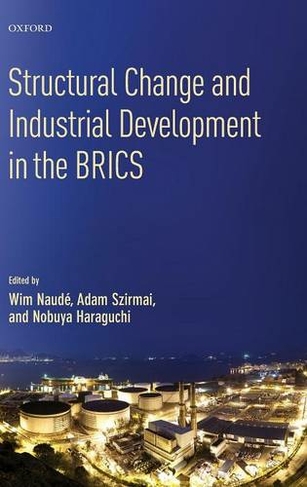 Structural Change and Industrial Development in the BRICS

This book provides a unique and timely analysis of the role of structural change in the economic development of Brazil, Russia, India, China, and South Africa (BRICS) with a consideration for the role of industry, and in particular manufacturing. The emergence of BRICS reflects an ongoing change in the international economic order. BRICS now account for very substantial part of global GDP, global manufactured value added and global manufactured exports. The book examines their economic experiences and structural change in BRICS over the past three decades, identifying both differences and commonalities, and deriving lessons for other industrializing countries. Section I contains comparative studies focusing on the commonalities and differences of the experiences of BRICS. Section II includes six country studies providing a more detailed analysis of the long-run experiences of each of the countries. Section III consists of a set of seven thematic studies focusing on specific topics such as global value chains, the role of transnational corporations in the food chain, the role of foreign versus domestic investment, the role of domestic versus foreign demand in economic growth the diffusion of environmental energy technology and the similarities, and the differences in industrial policies pursued in the five countries. The book contains a summary chapter that provides an integrated perspective of the various contributions from the point of view of poverty reduction and development. It asks, whether the patterns of structural change and industrial development that BRICS experienced, had an impact on poverty outcomes, and if so, what where the channels and the consequences? 72 Figures and 111 Tables

Wim Naude holds the Chair in Business and Entrepreneurship in Emerging Markets at the Maastricht University School of Business and Economics. He is also Dean of the Maastricht School of Management and a Research Fellow at IZA, the Institute for the Study of Labour, in Bonn, Germany. A graduate of the University of Warwick, he was previously Professorial Fellow at UNU-MERIT in Maastricht, Senior Research Fellow at UNU-WIDER in Helsinki, Professor and Director ofResearch at North-West University in South Africa and Research Officer at the Centre for the Study of African Economies, University of Oxford.Adam Szirmai is Professorial Fellow at UNU-MERIT and Professor of Development Economics at the Maastricht Graduate School of Governance of Maastricht University. His research focuses on structural change, innovation and long-term economic development in developing countries. Jointly with Wim Naude and Micheline Goedhuys he is editor Entrepreneurship, Innovation and Economic Development published by Oxford University Press in 2011 and with Wim Naude and Ludovico Alcorta editorof Pathways to Industrialization in the 21st Century published by Oxford University Press in 2013. A second edition of his textbook Socio-Economic Development is to be published by Cambridge University Press in 2015.Nobuya Haraguchi is Industrial Research Officer at the Research, Statistics and Industrial Policy branch of UNIDO in Vienna. He led a research team for the production of UNIDO Industrial Development Report 2013, Sustaining Employment Growth: The Role of Manufacturing and Structural Change. He has published widely on structural change, patterns of manufacturing and industrial policy and practice. Before joining UNIDO, he taught macroeconomics at St. John's University in the UnitedStates. He holds a PhD from the University of London.