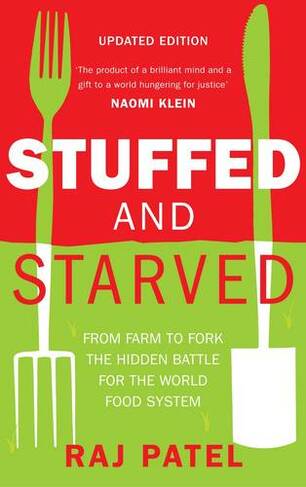 Stuffed And Starved From Farm to Fork: The Hidden Battle For The World Food System

We have so much choice over what we eat today because rural communities all over the world have had their choices taken away. To understand how our supermarket shopping makes us complicit in a system that routinely denies freedom to the world's poorest, and how we ourselves are poisoned by these choices, we need to think about the way our food comes to us. Stuffed and Starved takes a long and wide view of food production, to show how we all suffer the consequences of a food system cooked to a corporate recipe. This is also the story of the fight against the unthinking commerce that brings it to us. In the wrecked paddy fields of India, in the soy deserts of Brazil, in the maize ejidos of Mexico, the supermarket aisles of California, French McDonald's and Italian kitchens, there's a worldwide resistance against unhealthy control of the food system.

RAJ PATEL is an award-winning writer, activist and academic. He has degrees from Oxford, the LSE and Cornell, has worked for the World Bank and WTO, and protested against them around the world. He's currently a visiting scholar at UC Berkeley's Center for African Studies, an Honorary Research Fellow at the School of Development Studies at the University of KwaZulu-Natal and a fellow at The Institute for Food and Development Policy, also known as Food First. He is currently an IATP Food and Community Fellow. He has testified about the causes of the global food crisis to the US House Financial Services Committee and is an Advisor to the United Nations Special Rapporteur on the Right to Food. In addition to numerous scholarly publications, he regularly writes for the Guardian, and has contributed to the LA Times, NYTimes.com, the San Francisco Chronicle, the Mail on Sunday, and the Observer. His first book was Stuffed and Starved: From Farm to Fork, The Hidden Battle for the World Food System and his latest, The Value of Nothing, is a New York Times best-seller.