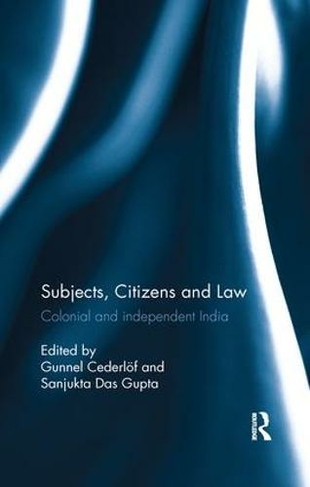 This volume investigates how, where and when subjects and citizens come into being, assert themselves and exercise subjecthood or citizenship in the formation of modern India. It argues for the importance of understanding legal practice how rights are performed in dispute and negotiation from the parliament and courts to street corners and fiel

Gunnel Cederloef is Professor of History at the Linnaeus University, Centre for Concurrences in Colonial and Postcolonial Studies, Sweden. Her work focuses on social, environmental and legal history in Indian modern and British Imperial history. Among her publications are Founding an Empire on India's North-Eastern Frontiers, 1790-1840: Climate, Commerce, Polity (2014); Landscapes and the Law: Environmental Politics, Regional Histories, and Contests over Nature (2008); Ecological Nationalisms: Nature, Livelihoods and Identities in South Asia (with K. Sivaramakrishnan, 2006); and Bonds Lost: Subordination, Conflict and Mobilisation in Rural South India, c. 1900-1970 (1997).Sanjukta Das Gupta is Associate Professor of Modern and Contemporary Indian History at the Department of Italian Institute of Oriental Studies, Sapienza University of Rome, Italy. Earlier she taught at the University of Calcutta, India. She is the author of Adivasis and the Raj: Socio-economic Transition of the Hos, 1820-1932 (2011) and has co-edited Narratives of the Excluded: Caste Issues in Colonial India (2008) and Narratives from the Margins: Aspects of Adivasi History in India (2012).