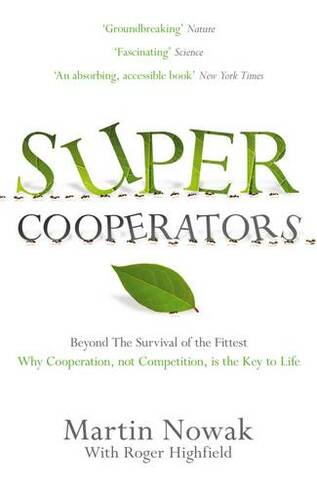 By Martin Nowak (Author), Roger Highfield (Author)
Paperback
£10.65 rrp £12.99 Save £2.34 (18%)
GBP
Availability
In Stock
Free Delivery Available When You Spend £15 Or More
Details
Spend £15 On Products To Receive Free Standard Delivery To Your Home Or Free Next Day Click and Collect To Stores
Share

Beyond The Survival of the Fittest: Why Cooperation, not Competition, is the Key to Life If life is about survival of the fittest, then why would we risk our own life to jump into a river to save a stranger? Some people argue that issues such as charity, fairness, forgiveness and cooperation are evolutionary loose ends, side issues that are of little consequence. But as Harvard's celebrated evolutionary biologist Martin Nowak explains in this groundbreaking and controversial book, cooperation is central to the four-billion-year-old puzzle of life. Indeed, it is cooperation not competition that is the defining human trait.

Martin Nowak is Professor of Biology and Mathematics at Harvard University. Dr Nowak is the recipient of Oxford's Weldon Memorial Prize, the Albert Wander Prize of the University of Bern, the Akira Okubo Prize of the Society for Mathematical Biology, the Roger E. Murray Prize awarded by the Institute for Quantitative Research in Finance, the David Starr Jordan Prize given jointly by Stanford, Cornell, and Indiana universities, and the Henry Dale Prize of The Royal Institution, London. He has held major research posts and teaching posts at Oxford University, Princeton University and now Harvard University. He has published over 300 papers and has been widely praised for revolutionizing the mathematical approach to biology. Roger Highfield, PhD, is the Editor of New Scientist magazine and was the Science Editor of the Daily Telegraph for two decades. He has written or coauthored six popular science books, two of which have been bestsellers. www.rogerhighfield.com