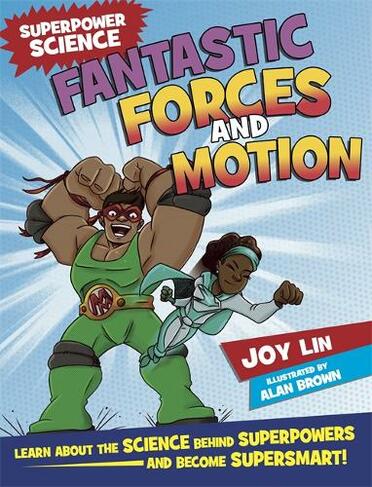 What if you could fly or have super strength or super speed? You'd be a superhero BUT are these superpowers feasible in the real world? Superpower Science: Fantastic Forces and Motion tells you all about the reality of these superpowers when looked at through a scientific lens. The series Superpower Science focuses on the superpowers commonly associated with superheroes and reveals just how scientifically realistic they could be to us mere humans. Each title focuses on four superpowers and explains which science principles would come into action if the superpower existed and what effect these science principles would have on the body. Momentum builds through each superhero story as we question everything and clearly explain the science behind their powers as they would exist in real-life. The comic book format and vintage-looking colourful illustrations paired with quirky and humorous explanations turn what would be considered by many as dry physics principles into high interest exciting books. By pointing out the physical limitations of superpowers, the series aims to fix them, not crush children's dreams but inspire them to be interested in science. Perfect for reader aged 9 and up.

Joy Lin is a high school science teacher in Austin, Texas until recently. She has a BA in Biology, a BS in Chemistry and another BS in Biochemistry from UT Austin. In 2013, TED and Kohl's Cares teamed up to look for 18 most inspiring lessons to animate, and her Hollywood vs. Science lessons were selected. She wrote a series of 6 videos: If Superpowers Were Real. She is also the author of the four-book series Superpower Science.She is now in the process of becoming an entertainer. She is a stand-up comedian who's been featured in 4 comedy festivals and competitions, most recently in NYC. Alan is a freelance artist who started out as a storyboard artist for a London agency, before going back to his roots in the North East to pursue a career in graphic design. Alan's love has always been illustration, so 13 years on, via a stint as a tattoo artist he arrived back at illustration. Alan has be fortunate to work on a variety of jobs. He can turn his hand to many styles to suit the client, but with a keen interest in the comic book world he is at home working on bold graphic pieces and strip work. Working from an attic studio along with his trusty side kick, Ollie the miniature schnauzer (miniature in size, giant in personality and appetite), and his two sons Wilf and Teddy.