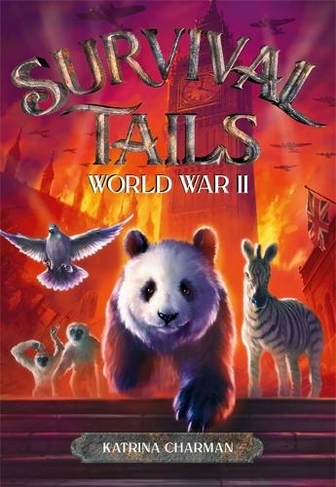 A group of zoo animals and a brave messenger pigeon must fight for survival during the London Blitz in this exhilarating third installment of Survival Tails, perfect for fans of the Ranger in Time and I Survived series! World War II is raging across Europe and the German army has their sights set on England. Messenger pigeon Francis carries important notes back and forth between England and her allies, and wants nothing more than to do his part for the war effort. But when Francis is injured on an assignment to deliver the most important message of the war--one which warns of a coming attack on Britain itself--he finds himself stranded in the middle of the London Zoo with no way to complete his mission. Ming, the world-famous panda, has so far managed to avoid being caught up in the war. But that's getting harder and harder to do as the zoo suffers under dwindling food rations and German air raids threaten the city every night. When Francis lands in Ming's enclosure, she knows she can no longer stand by and do nothing. Enlisting the help of a kind zookeeper and a resourceful troop of monkeys, Ming fights to help Francis recover his strength so that he can carry out his mission and deliver his message. But when the war finally arrives in London, threatening everyone in the zoo, Francis, Ming, and the other animals must work together to save themselves...and maybe even London itself. With engaging nonfiction back matter that delves deep into the true story behind the action-packed animal adventure novel, Survival Tails: World War II is sure to keep readers on the edge of their seats.

Katrina Charman lives in a small village in the middle of South East England with her husband and three daughters. Katrina has wanted to be a children's writer ever since she was eleven, when her school teacher set her class the task of writing an epilogue to Roald Dahl's Matilda. Her teacher thought her writing was good enough to send to Roald Dahl himself. Sadly, she never got a reply, but the experience ignited her love of reading and writing. She is the author of the books of the Survival Tails series as well as a number of forthcoming picture books and leveled readers.