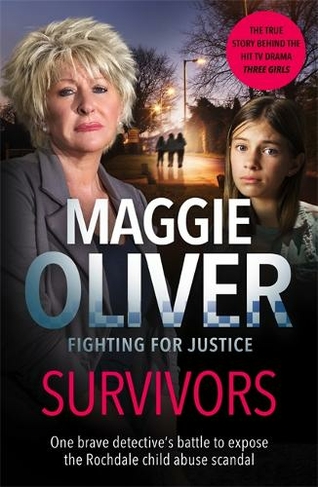 By Maggie Oliver (Author)
Paperback
https://www.whsmith.co.uk/products/survivors-one-brave-detectives-battle-to-expose-the-rochdale-child-abuse-scandal/maggie-oliver/paperback/9781789460858-12-000.html £7.37 rrp £8.99 Save £1.62 (18%)
GBP
Availability
In Stock
Free Delivery Available When You Spend £25 Or More
Details
Spend £25 on eligible products to receive free standard delivery to home or free next working day click and collect to store
Share

THE SHOCKING TRUE STORY BEHIND THE HIT TV DRAMA THREE GIRLS When detective Maggie Oliver first discovered that children as young as 10 were being groomed, abused and trafficked for sex by gangs of men in the Rochdale area, she felt like a lonely voice calling for people to act. Banging on closed doors, it seemed that nobody was able or willing to help her save these vulnerable girls, but she couldn't just sit back while countless lives were being destroyed forever in plain sight. Instead, she launched a one-woman campaign to bring down these sickening gangs. This is the heart-breaking and shocking story of how the actions of one determined detective secured convictions in what is now one of the most notorious grooming cases in the UK. Along the way Maggie discovered countless examples of how the authorities were letting down our most vulnerable children. She blew the whistle, losing her job and at times her mind at times, in a bid to stop others from experiencing the same. This is the first ever account from a police insider on the endemic problem of child sexual exploitation across the nation and how these cases are handled by the authorities put in place to protect us. It tells the story of a woman brave enough to speak out and a group of girls who found the strength to fight for justice after having their lives completely shattered by their abusers; together they show in shocking detail why this must never happen again.

Maggie Oliver is best known as the detective-turned-whistleblower who resigned from Greater Manchester Police in 2012 in order to expose the Rochdale grooming scandal.Prior to that Maggie worked in the Serious Crime Division of GMP for many years and was commended for her work on countless gangland murders, shootings, kidnappings, rapes and witness protection jobs.Her experiences on the Rochdale child sexual exploitation case were portrayed by Lesley Sharp in the BBC award-winning drama Three Girls, for which she acted as the programme consultant. The show was watched by over nine million people in 2017.More recently Maggie has made high-profile appearances on Celebrity Big Brother - Year of the Woman and Loose Women as a part of their Never Too Late To Tell campaign. She is now an established broadcast commentator and speaker on current affairs and human rights. She is a doting mum and grandmother and resides in the north of England. This is her first book.