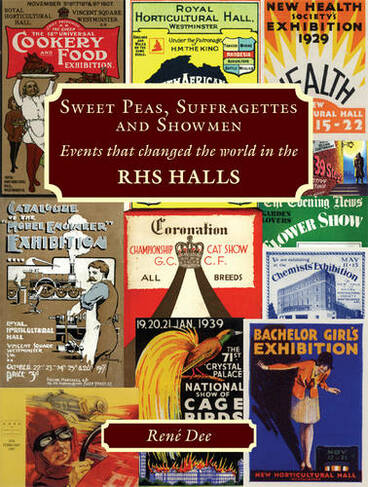 The History of the Royal Horticultural Society and its distinguished accomplishments in the fields of horticulture and gardening are already well documented. However, what has never been fully documented or revealed before now, is the rich, fascinating and important history of the non-horticultural events, and those involved with them that have taken place in their Halls since the opening of the first one, on Vincent Square, by King Edward VII and Queen Alexandra on 22 July 1904. The second Hall, an Art-Deco marvel of its day, built on Elverton Street was opened by HRH Princess Mary on 26 June 1928. The paradox is that these Halls, although built specifically for the RHS, have never simply been respositories for their own regular flower, fruit and vegetable shows. More especially, they have been home to a diverse mix of over 7,000, historically, politically, socially and culturally important events that mirrored life and its continuous change in London and Great Britain through 10 decades up to the present day. My book, therefore, concentrates on this aspect of their, hitherto, unrevealed use; the events that were staged in them; the extraordinary people involved in them, as catalysts, the changing face of the way we have lived, thought and developed over this period. Illustrations (some col.)

Rene Dee is CEO of the Westminster Collection, a marketing collective of over 50 leading business tourism venues in the Borough of Westminster, London. Founded by him in 2003, its members include iconic historical royal palaces, bijou hotels, intimate private member's clubs, and superb meeting, banqueting, and exhibition facilities in extraordinary buildings. He has been involved in the leisure and business tourism sectors for over 40 years, and was recruited by the Royal Horticultural Society in 1991 to reposition their Westminster, London exhibition and conference Halls. As Managing Director of the Society's commercial subsidiary, Horticultural Halls Ltd, he carried out extensive upgrades and marketing initiatives that led to the Royal Horticultural Halls & Conference Centre becoming recognised as one of London's leading multi-purpose business tourism venues. He has also held positions as Deputy Chairman of the British Exhibition Venues Association, as a Visit London 'Business Tourism Champion', and as a member of the Central London Partnership's Tourism Advisory Group, between 1991 and 2008.