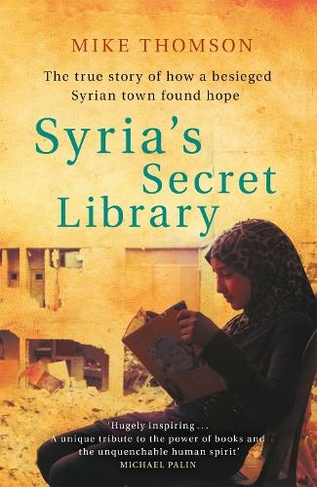 By Mike Thomson (Author)
Paperback
https://www.whsmith.co.uk/products/syrias-secret-library-the-true-story-of-how-a-besieged-syrian-town-found-hope/mike-thomson/paperback/9781474605922-12-000.html £7.37 rrp £8.99 Save £1.62 (18%)
GBP
Availability
In Stock
Free Delivery Available When You Spend £25 Or More
Details
Spend £25 on eligible products to receive free standard delivery to home or free next working day click and collect to store
Share

'Hugely inspiring . . . A unique tribute to the power of books and the unquenchable human spirit' MICHAEL PALIN 'An inspiring read - humanity at its best' DAVID NOTT, author of War Doctor Daraya lies on the fringe of Damascus, just south west of the Syrian Capital. Besieged by government forces since 2011, its people were deprived of food, bombarded by bombs and missiles, and shot at by snipers. But while the streets above echoed with rifle fire, deep beneath lay a secret library - a haven of peace with books lining almost every wall. Many people had risked their lives to save these precious titles from the devastation of war. Because to them, the secret library was a symbol of hope - of their belief that books would triumph over bombs and help them rebuild their fractured society. This is the true story of an extraordinary place and the people who made it happen.

Mike is a multi-award winning World Affairs correspondent for the BBC. Over the last decade, his work has taken him to many of the world's most troubled places. These have included Syria, Iraq, Afghanistan, Somalia, North Korea, Darfur, DR Congo, Sierra Leone, North Sinai and the Central African Republic. He has reported undercover in places like Libya, Zimbabwe and Myanmar and covered some of the world's biggest news events including the war in Syria, the election of several US presidents, the devastating Haiti earthquake, the fall of Gaddafi and the death of Nelson Mandela.