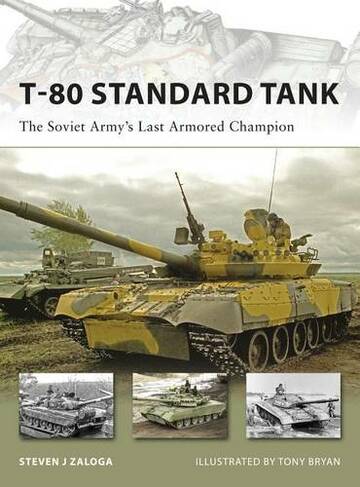 The Soviet T-80 Standard Tank was the last tank fielded before the Soviet collapse, and the most controversial. Despite having the most sophisticated fire controls and multi-layer armor ever fielded on a Soviet tank, its turbine power plant (rather than a conventional diesel) remained a source of considerable trouble throughout its career. Steven J Zaloga charts the little-known history of the T-80, covering the initial construction, through the development to the subsequent variants, the T-84 and Russia's enigmatic Black Eagle Tank. Accompanying detailed cut-away artwork illustrates the unusual design features that made the T-80 so controversial. Illustrations

Steven J Zaloga was born in 1952. He received his BA in History from Union College and his MA from Columbia University. He has published numerous books and articles dealing with modern military technology, especially armored vehicle development. His main area of interest is military affairs in the former Soviet Union and Eastern Europe in World War II, and he has also written extensively on American armored forces. Steven lives and works in Maryland.