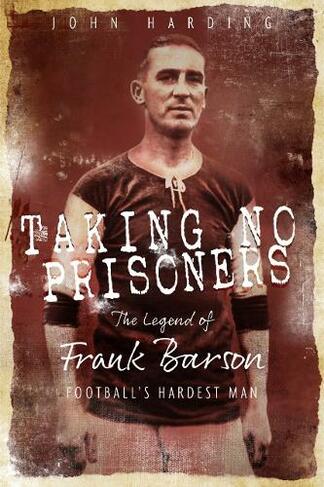 By John Harding (Author)
Paperback
https://www.whsmith.co.uk/products/taking-no-prisoners-the-legend-of-frank-barson-footballs-hardest-man/john-harding/paperback/9781785315299-12-000.html £10.65 rrp £12.99 Save £2.34 (18%)
GBP
Availability
In Stock
Free Delivery Available When You Spend £25 Or More
Details
Spend £25 on eligible products to receive free standard delivery to home or free next working day click and collect to store
Share

Frank Barson's life story is one of hardship and hard-won fame, his tough tackling and prowess in controlled aggression earning him a reputation that lives on today. Rising from the factory floor to become a footballing giant, Barson lifted the fortunes of Aston Villa and Manchester United while earning more cautions than anyone before or since. Born in Sheffield's industrial district of Grimesthorpe, his no-nonsense football style was forged in the 20s when learning his trade with Barnsley FC's renowned Battlers. Even in an era of ruthless tackling he stood out as a notoriously powerful player, yet his frequent clashes with authority belied his status as an extremely intelligent player, an inspiration to his colleagues and a true leader. Although Barson only earned a single England cap, commentators and colleagues alike would bemoan the fact that he was not captaining the national side. Football's infamous 'hard man' set standards in deadly, focussed aggression which players such as Norman Hunter and Roy Keane have since striven to emulate.

John Harding is the author of an acclaimed history of the Professional Footballers' Association and is the biographer of footballers Billy Meredith and Alex James as well as 1930s boxer Jack Kid Berg. John has written football articles for Blizzard, When Saturday Comes, Soccer Review and the Evening Standard, and has worked for Sky TV and the PFA.