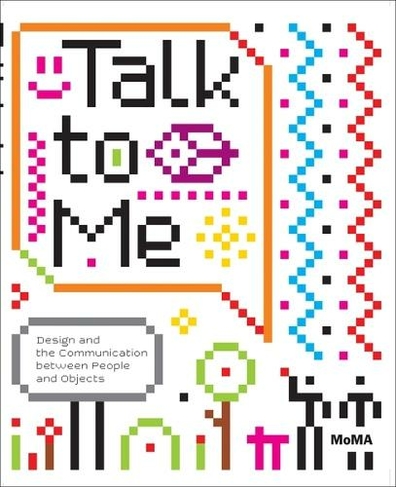 Talk to Me: Design and the Communication between People and Objects

Published in conjunction with an exhibition at The Museum of Modern Art, Talk to Me thrives on an important late 20th-century cultural development in design: a shift from the centrality of function to that of meaning. From this new perspective, objects contain information that goes well beyond their immediate use or appearance, providing access to complex systems and networks and acting as gateways and interpreters. Whether openly and actively, or in subtle, subliminal ways, things talk to us, and designers write the initial script that lets us develop and improvise the dialogue. Talk to Me focuses on objects that involve direct interaction, such as interfaces, information systems, communication devices, and projects that establish a practical, emotional or even sensual connection between their users and entities such as cities, companies, governmental institutions, as well as other people. The featured objects range in date from the early 1980s - beginning with the first Graphic User Interface, developed by Xerox Parc in 1981 - with particular attention given to projects from the last five years and to several ones currently in development. Included are a diverse array of examples, from computer and machine interfaces to websites, video games, devices and tools, and installations. Organized thematically, Talk to Me features essays by Paola Antonelli, Jamer Hunt, Alexandra Midel, Kevin Slavin, and Koi Vinh. By introducing design practices that are becoming increasingly crucial to our world, the book presents a highly distilled sample of today's best design production that uses technology in creative and unexpected ways, showing how rich and deep design's influence will be on our future. 407 Illustrations, color