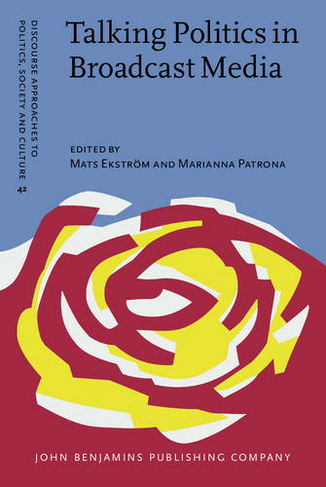 By Marianna Patrona (Contributor), Mats Ekstrom (Author)
Hardback
https://www.whsmith.co.uk/products/talking-politics-in-broadcast-media-crosscultural-perspectives-on-political-interviewing-journalism-/marianna-patrona/mats-ekstrom/hardback/9789027206336-01-000.html £80.00
GBP
Availability
Currently unavailable. We don't know when or if this item will be back in stock
With Free Saver Delivery
Details
FREE SHIPPING over £20 for Saver Delivery
Share

This book is a collection of studies on political interaction in a variety of broadcast, namely news and current affairs programs, political interviews, audience participation programs and radio phone-ins. Following a growing scholarly interest in political discourses, dialogic forms of news production and media talk in general, a number of internationally acclaimed scholars investigate the discursive and interactional practices that give rise to the arena of public politics in contemporary society. Chapters span an array of cultural contexts, as diverse as Sweden, Greece, Belgium (Flanders), the U.K., Spain, Israel, the U.S.A., Australia and China. Authors combine an interest in discourse analysis and conversation analysis with different disciplinary orientations, such as linguistics, media and cultural studies, sociology, political science, and social psychology. The book uncovers current trends in media and political discourse, and will be of interest to both students and scholars of media discourse and politics.