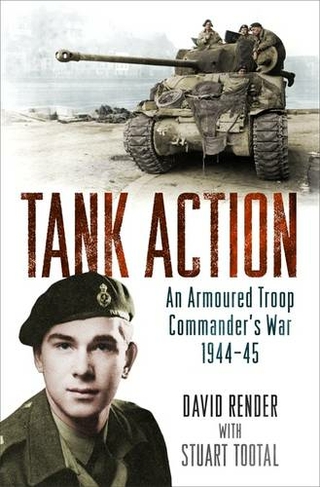 A gripping account of the Second World War, from the perspective of a young tank commander. In 1944, David Render was a nineteen-year-old second lieutenant fresh from Sandhurst when he was sent to France. Joining the Sherwood Rangers Yeomanry five days after the D-Day landings, the combat-hardened men he was sent to command did not expect him to last long. However, in the following weeks of ferocious fighting in which more than 90 per cent of his fellow tank commanders became casualties, his ability to emerge unscathed from countless combat engagements earned him the nickname of the 'Inevitable Mr Render'. In Tank Action Render tells his remarkable story, spanning every major episode of the last year of the Second World War from the invasion of Normandy to the fall of Germany. Ultimately it is a story of survival, comradeship and the ability to stand up and be counted as a leader in combat.

David Render was a Second World War tank troop commander who participated in the D-Day landing and the entirety of the subsequent fighting in the Allies campaign to liberate Europe in 1944 and 1945. After the war, he went on to become a highly successful businessman and national champion racing-car driver.Stuart Tootal spent twenty years as a soldier, serving in Northern Ireland during the Troubles, the Gulf War and the invasion of Iraq in 2003. In 2006 he commanded 3 PARA as the first UK combat unit to be sent to Helmand province in Afghanistan. A champion of veterans' affairs, on leaving the Army he set up the Parachute Regiment Afghanistan Trust charity and now works in the City of London. A defence and security commentator for several national media networks, he also regularly lectures on leadership in the commercial environment. Tank Action is his third book.