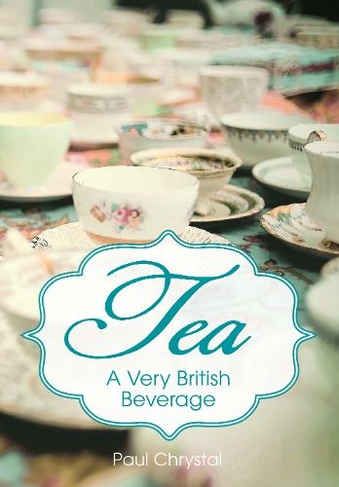 By Paul Chrystal (Author)
Paperback
£8.19 rrp £9.99 Save £1.80 (18%)
GBP
Availability
In Stock
Free Delivery Available When You Spend £15 Or More
Details
Spend £15 On Products To Receive Free Standard Delivery To Your Home

The ubiquitous cup of tea is as much a part of British life as indifferent weather, the BBC or the queue at the post office. Look at the facts: we Britons drink 62 billion cups per year; 70 per cent of the population (over age ten) drank tea yesterday; over 25 per cent of milk consumed in the UK goes into your cup of tea. Tea, since its arrival here in the seventeenth century, has shaped our lives, our history, our work, our culture and even our bodies. Not surprisingly for a drink that we take throughout the day, every day, there is a fascinating story to tell about its origins and how it took Britain by storm to become our second most-popular beverage after tap water. This book begins with the early history of tea and goes on to chart its development as something quintessentially British with it slowly but surely insinuating itself into our culture, language and society. Our loss of the American colonies, the Opium Wars, female emancipation and victory in the Second World War all owe something to a nice cup of tea. Tea is synonymous with Britain. The story of our intimate relationship with tea is in effect the social history of Britain, reflecting aspects of the nation's trade, manners, fashion, art, drinking habits, industrial legislation, foreign policy, and its health. Like Samuel Johnson, we just can't get enough of it: 'You cannot make tea so fast as I can gulp it down.' So, put the kettle on, and read the amazing tale of tea ... 50 Illustrations, unspecified

Paul Chrystal was educated at the Universities of Hull and Southampton where he took degrees in Classics and wrote his MPhil thesis on attitudes to women in Roman love poetry. He appears regularly on BBC local radio the World Service as well as publishing features for national newspapers and history magazines. He has been history advisor for a number of York tourist attractions and is the author of many books on a wide range of subjects, including histories of northern places focussing on Yorkshire, social histories of tea, chocolate and confectionery and various aspects of classical literature and Roman history. Paul lives near York and is married with three grown up children.