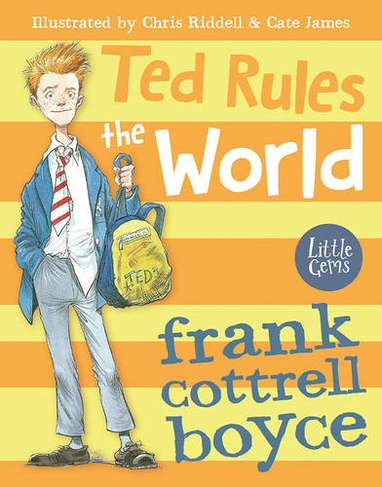 Ted thinks there's something fishy going on. Ever since his birthday when he got a special loyalty card at the local shop, all his great ideas are being thought of by the new Prime Minister too. Now there's laws about walking to school and everyone has Mondays off! Could the shop's market research lady have anything to do with it? And if Ted has become a Leader, shouldn't he start thinking up proper laws to save the world...? Hilariously spot-on comedy from the award winning and bestselling Frank Cottrell Boyce, with cover artwork by award-winning Chris Riddell and internal illustrations by Cate James. High quality cream paper and a special easy to read font ensure a smooth read for all.

Chris Riddell is an award-winning artist, cartoonist and author and was appointed the UK Children's Laureate in 2015, a role which he used to promote the joy of drawing, doodling and telling stories. He lives in Brighton with his wife and three children, plus Rosie his invisible dog. Chris says that he gets up at 5.32 sharp every morning - "except on the days that I don't".When Cate James was little she copied pictures from books all the time and she still has a picture of a crocodile that she drew when she was two. Cate says, "I like to draw with an old ink pen. I like to make a mess and have inky hands!" Cate lives in Australia.Frank Cottrell Boyce's first book, Millions, won the Carnegie Medal and his many other awards include the Guardian Children's Fiction Prize. Frank is also a screenwriter, regularly collaborating with Michael Winterbottom and Danny Boyle, with whom he devised the 2012 London Olympics Opening Ceremony. He has written three sequels to Chitty Chitty Bang Bang and counts an episode of Doctor Who that he wrote in 2014 a particular achievement, saying, "Nothing compares to the buzz of writing the words 'Interior...TARDIS!'" Frank has seven children and lives in Liverpool.