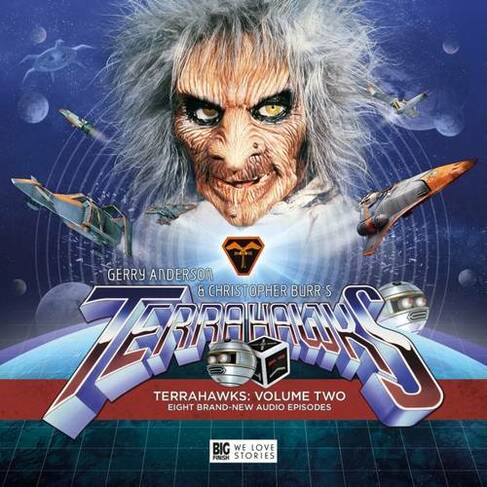 In the not too distant future, the Earth finds itself under constant threat from Zelda, a blood-thirsty android who, along with her fiendish family and monstrous creations, has established a base on Mars. The only thing standing between this evil queen and her quest for the ultimate annihilation of mankind are the Terrahawks - an intrepid band of heroes led by the stern but fair clone, Doctor Tiger Ninestein. In this new series, the Terrahawks defence grows all the more desperate, when a terrifying new enemy joins the Androids on Mars. This new villain has a sinister connection to Queen Zelda; and together with an army of new monsters, the Earth doesn't stand a chance! Eight episodes on four CDs, with a bonus, behind-the-scenes CD featuring interviews with the cast and crew: 1. Sale of the Galaxy by Andrew T Smith and Jamie Anderson Ninestein and Zelda both receive invitations to appear on a gruesome gameshow - Sale of the Galaxy. But will grim gameshow host, Nickel-plate Starsons' personal history with Zelda influence the outcome of the game? 2. The Trouble With Toy Boys by Chris Dale.A pernicious puppet - one half of a famous ventriloquist act - is on the loose, but even the Terrahawks can't keep a bad dummy down as Timmy the Toy Boy takes his final act to Hawknest! 3. Return to Sender Chris Dale. The return of a missing NASA probe and an encounter with an old flame of Ninestein's means a case of fatal attraction for the Terrahawks.4. Renta-Hawks by Andrew T Smith. A beautiful island in the pacific - the secret base of Global Rescue. So far - undetected. Outwardly the luxury home to billionaire ex-nightclub owner Dick Branston. But there's something fishy about this gang of slick would-be heroes - particularly the firm's backer. 5. Chain of Command by Geraldine Donaldson. With Zelda missing, the government's focus is firmly on the Terrahawks, and Ninestein is under serious pressure to cooperate. So when a mysterious device lands in Texas, Kate and Mary must go on a Thelma and Louise style mission to prevent the package getting into the wrong hands. 6. Lights, Camera, Disaster by David Hirsch. It-Star's plans for a propaganda movie go awry when Anderburr Pictures' new owner - Lord Low Grade - decides to make a few alterations to the script. 7.Count Anaconda's Magnificent Orbiting Circus by Terry Adlam. Roll up, roll up for the most amazing show in the Universe. Malevolent MC Count Anaconda welcomes one and all to the orbiting big top, although the chances are that you may never leave...8. My Enemy's Enemy by Jamie Anderson. Hiro and Ninestein finally decode Zelda's message, and not a moment too soon. The android queen is in trouble - on the run from her greatest foe; a direct descendent of her original master - Prince Zegar of Guk. Finding themselves outgunned and outnumbered, could this be the end of the Terrahawks? Eight episodes on four CDs, with a bonus, behind-the-scenes CD featuring interviews with the cast and crew. Director and producer Jamie Anderson is the son of Gerry Anderson - who created Terrahawks as well as other hit shows such as Captain Scarlet, UFO and Thunderbirds. The Gerry Anderson shows have a huge following across the world, and Big Finish's announcement of this title has already received a lot of attention on the Internet.Jeremy Hitchen and Denise Bryer reprise their voice roles from the 1983-1986 original series.C AST: Jeremy Hitchen (Ninestein, Hiro, It-Star [male], Hawkeye, Dick Branston), Robbie Stevens (101, Hudson, Yung-Star, Stew Dapples, Cy Splitter), Denise Bryer (Zelda, Mary Falconer, It-Star [female], Grandma Buggins), Beth Chalmers (Kate Kestrel, Cy-Star, Miss Donaldson), Nicholas Parsons (Nickel-plate Starsons), Richard James (Jeremy Vile).

Terrahawks Volume 2
Terrahawks Volume 2
Jamie Anderson
Audio Book
Currently unavailable. We dont know when or if this item will be back in stock
https://www.whsmith.co.uk/products/terrahawks-volume-2/jamie-anderson/andrew-t-smith/audio-book/9781781787809.html N/A
GBP