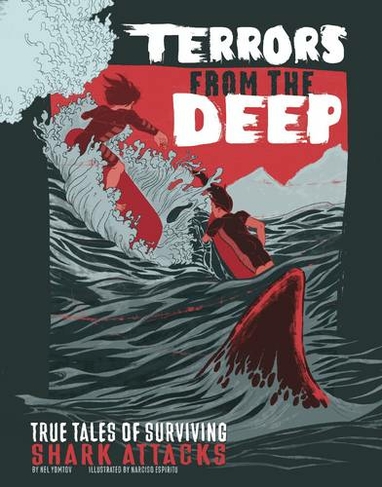 Terrors from the Deep True Stories of Surviving Shark Attacks

You're swimming in the ocean when you see a fin cutting through the water toward you. Shark! Although they have the upperhand in their watery home, some people have encountered shark attacks and have lived to show their scars. These true stories detail the amazing events of people who endured a shark attack and survived.

The career path of Nel Yomtov has taken him from the halls of Marvel Comics, as an editor, writer, and colorist, to the world of toy development. He then became editorial and art director at a children's nonfiction book publisher, and now Nel is a writer and editor of books, websites, and comics for children. A harmonica-honking blues enthusiast, Nel lives in New York with his wife, Nancy. They have a son, Jess. Narciso Espiritu Jr. is an illustrator who creates mostly brooding, sometimes dramatic, menacing, mysterious imagery with ink and digital color. He's the co-founder, editor-in-chief, and art director of Instigatorzine, a quarterly literature and art magazine featuring artists and writers from all around. He's always lived in Jersey City, right next to New York City. He graduated from New Jersey City University in Jersey City, NJ, with a BFA in Illustration, and had been drawing long before that. Narciso is working on an original graphic novel and a few quick comics while driving Instigatorzine. He's been acknowledged by POV Magazine, Creative Quarterly, and Light Grey Art Lab. Narciso loves dogs, but, strangely, doesn't draw them enough.