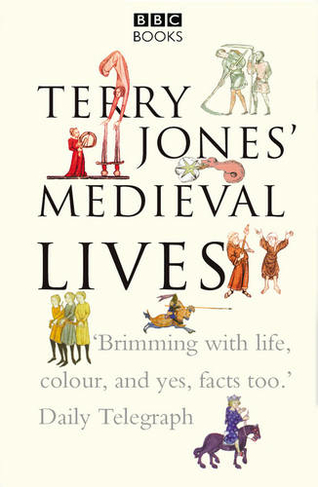 Was medieval England full of knights on horseback rescuing fainting damsels in distress? Were the Middle Ages mired in superstition and ignorance? Why does nobody ever mention King Louis the First and Last? And, of course, those key questions: which monks were forbidden the delights of donning underpants... and did outlaws never wear trousers? Terry Jones and Alan Ereira are your guides to this most misrepresented and misunderstood period, and they point you to things that will surprise and provoke. Did you know, for example, that medieval people didn't think the world was flat? That was a total fabrication by an American journalist in the 19th century. Did you know that they didn't burn witches in the Middle Ages? That was a refinement of the so-called Renaissance. In fact, medieval kings weren't necessarily merciless tyrants, and peasants entertained at home using French pottery and fine wine. Terry Jones' Medieval Lives reveals Medieval Britain as you have never seen it before - a vibrant society teeming with individuality, intrigue and innovation.

Terry Jones is best known as a member of Monty Python but he has also written books on medieval England, Chaucer's Knight, the highly acclaimed Who Murdered Chaucer? and Crusades, as well as Terry Jones' Barbarians, which accompanied a major television series he presented in 2006. He is the author of several children's books including Fairy Tales and Fantastic Stories, The Knight and the Squire and The Lady and the Squire. He has directed several feature films: Monty Python and the Holy Grail, The Life of Brian, The Meaning of Life, Personal Services, Erik the Viking and The Wind in the Willows.Alan Ereira has worked as an award-winning producer and writer of history programmes on radio and television for over 40 years, and has collaborated with Terry for ten years on a number of historical films. His previous books include The People's England, The Invergordon Mutiny, The Heart of the World and (with Terry Jones) Crusades and Terry Jones' Barbarians.