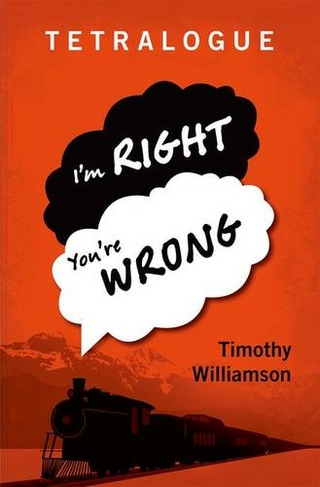 Four people with radically different outlooks on the world meet on a train and start talking about what they believe. Their conversation varies from cool logical reasoning to heated personal confrontation. Each starts off convinced that he or she is right, but then doubts creep in. In a tradition going back to Plato, Timothy Williamson uses a fictional conversation to explore questions about truth and falsity, and knowledge and belief. Is truth always relative to a point of view? Is every opinion fallible? Such ideas have been used to combat dogmatism and intolerance, but are they compatible with taking each opposing point of view seriously? This book presupposes no prior acquaintance with philosophy, and introduces its concerns in an accessible and light-hearted way. Is one point of view really right and the other really wrong? That is for the reader to decide.

Timothy Williamson was born in Uppsala, Sweden. He has been the Wykeham Professor of Logic at Oxford University since 2000. Before that he was Professor of Logic and Metaphysics at Edinburgh University, and also taught at Trinity College Dublin. He has held visiting positions in philosophy at MIT, Princeton, Michigan, Yale (from 2016), Australian National University, Chinese University of Hong Kong, National Autonomous University of Mexico, and elsewhere. His booksinclude Identity and Discrimination, Vagueness, Knowledge and its Limits, The Philosophy of Philosophy, and Modal Logic as Metaphysics. He is a Fellow of the British Academy, Foreign Honorary Member of the American Academy of Arts and Sciences, and Member of the AcademiaEuropaea.