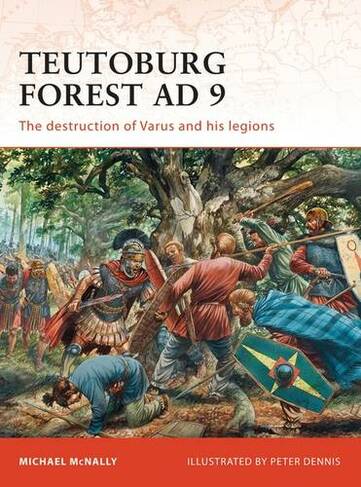 Quintilius Varus, give me back my legions!' supposedly yelled Augustus Caesar when he received the news of the disaster in the Teutoburg Forest. One of the greatest military disasters of the Roman Empire, Teutoburg Forest witnessed the near-total annihilation of three Roman legions at the hands of the German barbarians led by their Roman-educated chief Arminius. Michael McNally tells the complete story of the disaster, supported by the incredible artwork of Peter Dennis. 50 b/w; 42 col

Michael McNally was born in London in 1964. For as long as he can remember, he has been a passionate student of military history, with Irish history and the wars of Louis XIV and William III figuring predominantly amongst his varied areas of interest. He is married with three children and lives in Germany where he works for a major reinsurance company.Peter Dennis was born in 1950. Inspired by contemporary magazines such as Look and Learn he studied Illustration at Liverpool Art College. Peter has since contributed to hundreds of books, predominantly on historical subjects, including many Osprey titles. A keen wargamer and modelmaker, he is based in Nottinghamshire, UK.