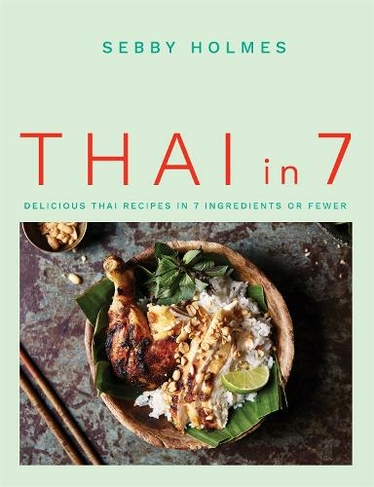 Thai in 7: Delicious Thai recipes in 7 ingredients or fewer

'Serves some of the most tastebud-smashing Thai food that north London has seen in years. Possibly ever.' Time Out on Sebby Holmes's restaurant Farang Thai recipes can often feature a long and off-putting list of ingredients, so it becomes a cuisine we treat ourselves to in a restaurant or as a takeaway rather than cook at home. In Thai in 7, acclaimed chef Sebby Holmes shows how with just 7 ingredients or fewer you can make deliciously fragrant and fiery Thai dishes any night of the week. From Prawn Pad Thai to King Oyster Mushroom Curry and Crispy Tofu with Coconut Cream & Thai Basil, Sebby's innovative, easy recipes retain the punchy flavours of Thai food using ingredients that can be found in any supermarket. With an enticing mix of fast, fresh and nourishing dishes, Thai in 7 celebrates the variety of Thai food with curries, stir-fries, pickles and desserts that are certain to make your taste buds tingle.

Sebby Holmes has worked in kitchens since the age of 13. He fell in love with Thai food whilst working at the Begging Bowl in Peckham, where he worked his way up to sous chef, before being head hunted for the head chef position at Smoking Goat in Soho, both highly praised Thai restaurants. His Thai pop-up, Farang, which featured at Taste of London and Street Feast London, now has a permanent home in Islington. His first book, Cook Thai, was published in 2017. www.faranglondon.co.uk@farangldn @sebbyholmes