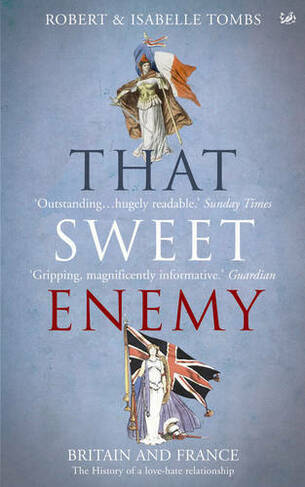 That Sweet Enemy: The British and the French from the Sun King to the Present

From Blenheim and Waterloo to 'Up Yours, Delors' and 'Hop Off You Frogs', the cross-Channel relationship has been one of rivalry, misapprehension and suspicion. But it has also been a relationship of envy, admiration and affection. In the nearly two centuries since the final defeat of Napoleon, France and Britain have spent much of that time as allies - an alliance that has been almost as uneasy, as competitive and as ambivalent as the generations of warfare. Their rivalry both on peace and war, for good and ill, has shaped the modern world, from North America to India in the eighteenth century, in Africa, the Middle East and South East Asia during the nineteenth and twentieth centuries, and it is still shaping Europe today. This magisterial book, by turns provocative and delightful, always fascinating, tells the rich and complex story of the relationship over three centuries, from the beginning of the great struggle for mastery during the reign of Louis XIV to the second Iraq War and the latest enlargement of the EU. It tells of wars and battles, ententes and alliances, but also of food, fashion, sport, literature, sex and music. Its cast ranges from William and Mary to Tony Blair, from Voltaire to Eric Cantona; its sources from ambassadorial dispatches to police reports, from works of philosophy to tabloid newspapers, from guidebooks to cartoons and films. It's a book which brings both British humour and Gallic panache to the story of these two countries, in sickness and in health, for richer for poorer, in victory and in defeat, in dominance and in decline. app 60 integrated maps and illustrations

Isabelle Tombs (nee Bussy) was born in France, studied at the Universite de Paris I (Pantheon-Sorbonne), and did a PhD on modern British history at Trinity College, Cambridge. Robert Tombs was born in England and studied at Cambridge. He did research for his PhD on modern French history in France, where he was attached to the Universite de Paris IV (Sorbonne). Isabelle teaches French at the Foreign and Commonwealth Office. Robert is Reader in French History at Cambridge and a Fellow of St John's College.