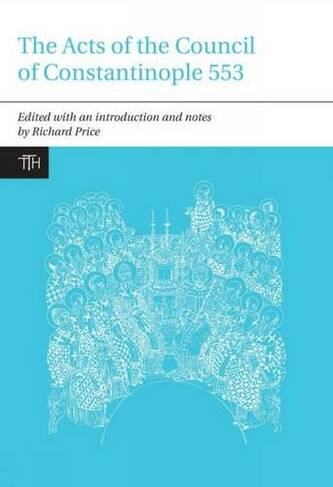 The Acts of the Council of Constantinople of 553: With Related Texts on the Three Chapters Controversy (Translated Texts for Historians 51)

By Richard Price (Contributor)
Hardback
https://www.whsmith.co.uk/products/the-acts-of-the-council-of-constantinople-of-553-with-related-texts-on-the-three-chapters-controvers/richard-price/hardback/9781846311789-01-000.html £120.00
GBP
Availability
Currently unavailable. We don't know when or if this item will be back in stock
Share

The Council of Constantinople of 553 (often called Constantinople II or the Fifth Ecumenical Council) has been described as 'by far the most problematic of all the councils', because it condemned two of the greatest biblical scholars and commentators of the patristic era - Origen and Theodore of Mopsuestia - and because the pope of the day, Vigilius, first condemned the council and then confirmed its decisions only under duress. The present edition makes accessible to the modern reader the acts of the council, session by session, and the most important related documents, particularly those that reveal the shifting stance of Pope Vigilius, veering between heroic resistance and abject compliance. The accompanying commentary and substantial introduction provide a background narrative of developments since Chalcedon, a full analysis of the policy of the emperor Justinian (who summoned and dominated the council) and of the issues in the debate, and information on the complex history of both the text and the council's reception. The editor argues that the work of the council deserves a more sympathetic evaluation that it has generally received in western Christendom, since it arguably clarified rather than distorted the message of Chalcedon and influenced the whole subsequent tradition of eastern Orthodoxy. In interpreting Chalcedon the conciliar acts provide a fascinating example of how a society - in this case the imperial Church of Byzantium - determines its identity by how it understands its past.