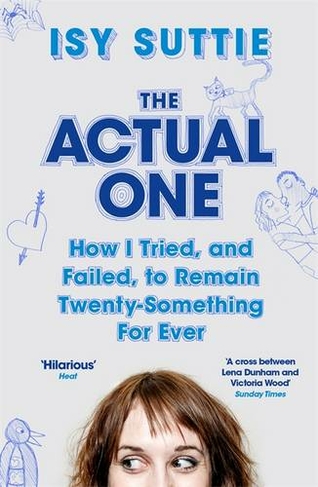 The Actual One How I tried, and failed, to remain twenty-something for ever

Isy woke up one day in her late twenties to discover that the invisible deal she'd done with her best mates - that they'd prolong growing up for as long as possible - had all been in her head. Everyone around her is suddenly into mortgages, farmers' markets and nappies, rather than the idea of running naked into the sea or getting hammered in Plymouth with eighty-year-old men. When her dearest friend advises her that the next guy Isy meets will be The Actual One, Isy decides to keep delaying the onset of adulthood - until a bet with her mother results in a mad scramble to find a boyfriend within a month. From papier-mache penguins to being stranded on a dual carriageway in nothing but a fur coat and trainers, THE ACTUAL ONE is an ode to the confusing wilderness of your late twenties, alongside a quest for a genuinely good relationship with a man who doesn't use moisturiser. author's own illustrations

Isy Suttie is a comedian, actress and writer who started performing stand up in 2002. She has written for the GUARDIAN, the OBSERVER, RED and GLAMOUR, and is a regular writer and performer on BBC Radio 4, where her show PEARL AND DAVE won a Gold Sony Award in 2013. This led to two series of her musical story show set in Matlock, ISY SUTTIE'S LOVE LETTERS. Her TV acting credits include Dobby in PEEP SHOW and Esther in SHAMELESS, and she has been nominated for three British Comedy Awards.www.isysuttie.com@Isysuttie