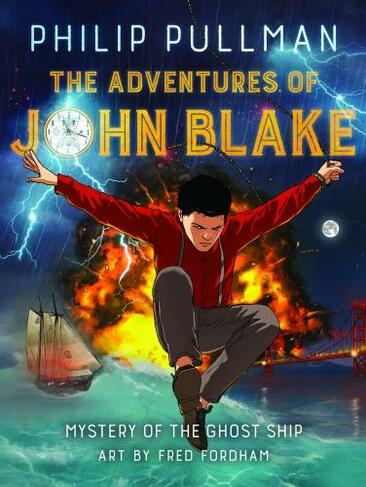 The Adventures of John Blake Mystery of the Ghost Ship

By Fred Fordham (Illustrator), Philip Pullman (Author)
Paperback
https://www.whsmith.co.uk/products/the-adventures-of-john-blake-mystery-of-the-ghost-ship/fred-fordham/philip-pullman/paperback/9781788450591-12-000.html £8.19 rrp £9.99 Save £1.80 (18%)
GBP
Availability
In Stock
Free Delivery Available When You Spend £25 Or More
Details
Spend £25 On Products To Receive Free Standard Delivery To Your Home Or Free Next Working Day Click And Collect To Store

Far out at sea, and hidden by the mists of time, sails the Mary Alice and her crew - searching for a way home. But the mysterious ship is being hunted by a villain who will go to ANY lengths to track them down... Join John Blake and the crew on an unforgettable time-travelling adventure. Full colour illustrations

Philip Pullman is the author of the multi-award winning fantasy trilogy His Dark Materials. He has won numerous awards for his children's books, including the Carnegie Medal, the Guardian Children's Book Award, the Smarties Prize, the Astrid Lindgren Memorial Award, the Whitbread Book of the Year Award and a CBE. In 2008, The Times named Pullman as one of the 50 greatest writers since 1945. Philip Pullman lives in Oxford with his wife, and has two sons. : Fred Fordham was born in 1985 and grew up in North London. His first graphic novel, Nightfall, was published by Editions Delcourt in 2013. He has also written and illustrated for David Lloyd's online comics art magazine, Aces Weekly, and works as an illustrator for The Phoenix comic.