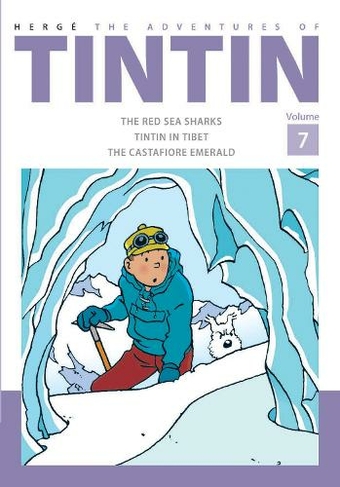 The Adventures of Tintin Volume 7

Join the world's most famous travelling reporter in his exciting adventures as he faces ruthless gangsters in The Red Sea Sharks, scales mountain peaks in Tintin in Tibet, and solves a baffling case of theft in The Castafiore Emerald. The Red Sea Sharks There's a rebellion in Khemed and the Emir's life is in danger! He has entrusted his mischievous son to Captain Haddock's care, but when an old friend of Tintin's is caught smuggling arms to the Khemed rebels, they must jump straight on a plane to find out what on earth is going on ... Tintin in Tibet Tintin's friend Chang has been killed in a terrible plane crash and Tintin is distraught. But after a strange dream, Tintin becomes convinced Chang is alive. Together with Captain Haddock, he sets out on an impossible mission, an adventure deep into the mountains, through blizzards and caves of ice. They must find Chang at all costs! The Castafiore Emerald When Captain Haddock meets a gipsy palm reader, he dismisses a forewarning about a beautiful lady's stolen jewels. But when the famous opera singer Bianca Castafiore suddenly descends on Marlinspike Hall, the gipsy's prediction seems to be all too real. Can Tintin catch the emerald thief? Join the most iconic character in comics as he embarks on an extraordinary adventures spanning historical and political events, and thrilling mysteries. Still selling over 100,000 copies every year in the UK and having been adapted for the silver screen by Steven Spielberg and Peter Jackson in 2011, The Adventures of Tintin continue to charm more than 80 years after they first found their way into publication. Since then an estimated 230 million copies have been sold, proving that comic books have the same power to entertain children and adults in the 21st century as they did in the early 20th.

Herge (Georges Remi) was born in Brussels in 1907. His pseudonym comes from his initials backwards (R.G., as pronounced in French). Over the course of 54 years he completed 23 albums of The Adventures of Tintin series, which is now considered to be one of the greatest, if not the greatest, comics series of all time. With translations published in over 80 languages, more than 230 million copies sold worldwide and a Hollywood movie to its name, Tintin dominates the Comics and Graphic Novels chart even today. Sadly, Herge died in 1983, leaving his 24th album, Tintin and Alph-Art, unfinished, but his hero continues to be one of the most iconic characters in both adult and children's fiction.