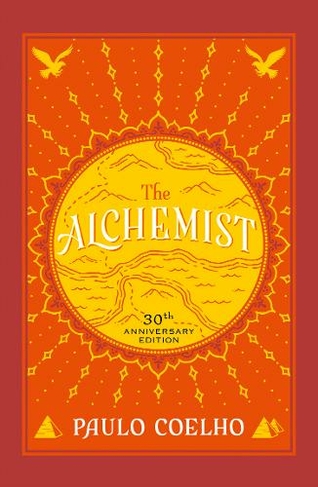 By Paulo Coelho (Author)
Paperback
https://www.whsmith.co.uk/products/the-alchemist-30th-anniversary-edition/paulo-coelho/paperback/9780008283643-12-000.html £8.19 rrp £9.99 Save £1.80 (18%)
GBP
Availability
In Stock
Free Delivery Available When You Spend £25 Or More
Details
Spend £25 On Products To Receive Free Standard Delivery To Your Home Or Free Next Working Day Click And Collect To Store

A special 30th anniversary edition of the extraordinary international bestseller, with a new foreword. Every few decades a book is published that changes the lives of its readers forever. This is such a book - a beautiful parable about learning to listen to your heart, read the omens strewn along life's path and, above all, follow your dreams. Santiago, a young shepherd living in the hills of Andalucia, feels that there is more to life than his humble home and his flock. One day he finds the courage to follow his dreams into distant lands, each step galvanised by the knowledge that he is following the right path: his own. The people he meets along the way, the things he sees and the wisdom he learns are life-changing. With Paulo Coelho's visionary blend of spirituality, magical realism and folklore, The Alchemist is a story with the power to inspire nations and change people's lives.

Paulo Coelho is the author of The Alchemist, he was born in 1947 in the city of Rio de Janeiro, Brazil. Being the author of 30 books that have sold over 320 million copies in 170 countries, he has become one of the most widely read authors in the world today. Paulo Coelho has been a United Nations Messenger of Peace since 2007 and this has allowed him to continue to promote intercultural dialogue and to focus on the needs of children. He is a member of the Brazilian Academy of Letters and the recipient of over 115 awards and honours, including the Hans Christian Andersen Award, the Grinzane Cavour Book Award and the Chevalier de l'Ordre National de la Legion d'Honneur, to name a few. Other titles include: The Pilgrimage, Brida, The Valkyries, The Fifth Mountain, Manual of the Warrior of Light, Veronika Decides to Die, The Devil and Miss Prym, Eleven Minutes, The Zahir, Like the Flowing River, The Witch of Portobello, The Winner Stands Alone, Aleph.