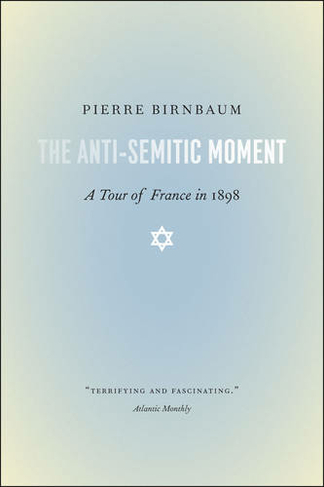 The Anti-Semitic Moment A Tour of France in 1898

In 1898, the Dreyfus Affair plunged French society into a yearlong frenzy. In Paris and provincial villages throughout the country, angry crowds paraded through the streets, attacking Jews and destroying Jewish-owned businesses. Anger about the imagined power of Jewish capital, as well as fears of treason and racial degeneration, made anti-Semitism a convenient banner behind which social and political factions could fall in line. The anti-Semitic feelings that had been simmering in France for decades came boiling to the surface. Here Pierre Birnbaum guides readers on a tour of France during this tumultuous crisis. He shows that in the midst of prolonged violence, Jewish citizens bravely and effectively defended themselves and were aided by a police force determined to maintain order. In "The Anti-Semitic Moment" Birnbaum paints a vivid portrait of French Jewish culture at the time and explains why the French state remained strong in this time of widespread unrest. .

Pierre Birnbaum is visiting professor of Jewish studies at Columbia University. A number of his works and edited collections have been published in English, including Anti-Semitism in Modern France, The Jews of the Republic, and Paths for Emancipation.